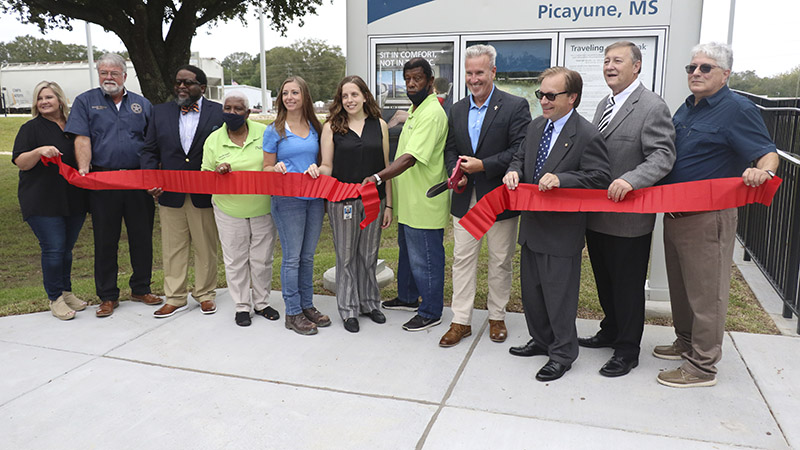 Construction of a new passenger train platform in Picayune began back in January. Eight months later the ribbon was cut on that new platform Wednesday morning, funded by Americans with Disabilities Act funding to build a compliant feature.
Colleen Nauss with Amtrak said final touches on the project were done on Sept. 3.
The only thing left on the project is to complete some paperwork, said Amtrak Program Manager Jamie Shindell.
Completion of the project means passengers boarding the passenger train from the Picayune stop, or disembarking here, will have a safer time getting on and off the train. Construction of the project included a new concrete pad, lighting, ramps from the parking lot that include railing and an enclosed lift to help those with mobility devices board the train. The lift is locked in the enclosure until needed.
Todd Stennis, Sr. Manager with Amtrak, said he came through Picayune back in 1992 on a train. When he debarked, he was greeted with a simple parking lot and a 90 foot strip of asphalt. A gazebo later provided passengers with a dry place to wait for their train.
Now, the city has an Intermodal Tourism Center, built back in 2007, where passengers can wait for their train.
Stennis said that a year or two ago he met with city representatives to discuss construction of the platform to make it complaint with ADA requirements. When Project Manager Christy Goss asked how much the city would have to match to complete the project, she was informed that it would be entirely paid for using ADA grant funding, meaning a match was not required.
He described train stations as front doors to cities who have stops.
Local resident Gary Herring said he became a squeaky wheel about the need for an updated platform years ago when he had to help a relative who was a polio victim disembark the train at the Picayune stop.
“I’m really proud of this project,” Shindell said. “And the community has been supportive during construction.”