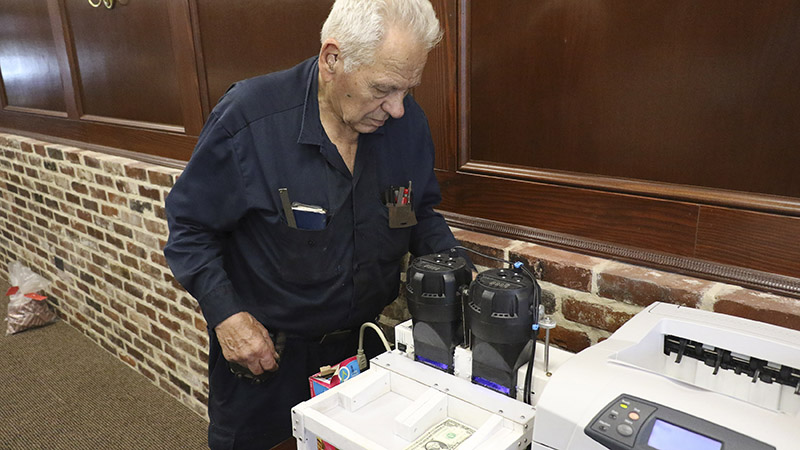 CLEANED WITH LIGHT: Roland Kleinfeld demonstrates how to use his invention which uses ultra violet light to clean money. Photo by Jeremy Pittari

A long time Picayune resident invented a machine that sanitizes paper money using ultraviolet light.
While it’s a prototype, and as such can treat two bills at a time at a rate of about 35 seconds per pair, it is in use in a local bank. The inventor, Roland Kleinfled, also runs a tool supply business down the street from the bank where it is being used.
First National Bank of Picayune staff at the East Canal Street location use the machine daily, but since it is a prototype and works slowly, it’s not used to treat every bill that comes through the bank, said President and CEO David Hemeter.
“First National Bank is extremely pleased that Mr. Kleinfield has allowed us to use his machine to sanitize currency,” Hemeter said in a written statement.
Kleinfeld said he got the idea to make the machine while watching television a couple of months ago when an individual claimed that such a machine could not be made.
To meet that challenge, Kleinfeld used three old laminating machines and four ultraviolet bulbs mounted on the top and underside of the machine. Utilization of the machine is as simple as pushing a bill through one side of the motorized device, which does the rest. The money is pulled through the machine at a slow enough rate to allow the light to hit the bills and kill any contaminants.
With a background in engineering, Kleinfeld said it only took about a month to build the machine. He also has military experience as a German translator for the Army, time at Curtiss-Wright Nuclear in Canada and was involved in testing for nitrogen oxide effluent at Stennis Space Center for several weeks in 1970. During his time at Stennis he said he met his second wife and made Picayune his home.
His diverse background allowed him to see that there is the potential for viruses such as COVID-19 to be transferred via paper money, resulting in his interest to create the machine.