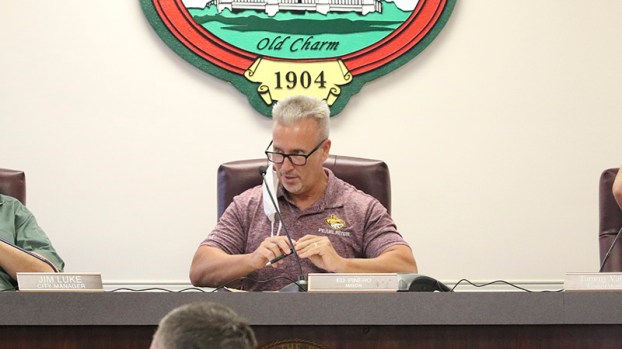 BACK IN CITY HALL: Mayor Ed Pinero removes his mask briefly while speaking with one of the City Council members who attended the Sept. 1 meeting via telephone. Photo by Jeremy Pittari

A nearly $35.5 million budget was approved by Picayune’s City Council during Tuesday’s meeting.
Revenues within that total budget include, $13.7 million in the general fund, $7.3 million will come from special revenue, $420,683 will come from the airport, $12.7 million will come from the enterprise fund and $1.1 million will come from the debt service fund.
Expenses for the coming fiscal year will include $1.9 million for general government, $3 million for the police department, $2.3 million for the fire department, $7.6 million for public works, $1 million for utility administration, $287,446 for the office of the director of public works, $2 million for water system operations, $3 million for natural gas operations, $946,302 for garbage collection, $471,128 for economic development, $131,173 for airport operations, and $128,207 for cemetery operations.
The total expense in the coming fiscal year is expected to be $26.4 million, leaving $9 million as the anticipated ending cash balance.
In other business, the Council approved a request from Omar Nelson to subdivide a lot located at 599 Fourth Street.
Before that request was approved, Joe Davis, who lives on that same street near the property in question, expressed his concern that construction of a home on that lot could cause water to build up on his own property if the proper precautions are not taken. His concern is the extra water could cause his slab to sink.
Code Enforcement Officer Tom Milar said the lot has been vacant for about 50 years, and the property owner plans to install a feature to address the dispersion of water.
However, Davis expressed concern that the proposed solution did not entail the installation of a French drain. Milar said the anticipated cost to install a French drain was $20,000.
Mayor Ed Pinero said that the only matter on the agenda for Tuesday’s meeting was to approve the subdivision of the lot, before a building permit can be applied for, the property owner will be required to ensure his construction does not negatively affect surrounding homes.
During the Council members concerns portion of the meeting, Councilor Larry Breland said he would like to see a resolution to the problem of trains blocking all crossings in the city. Recently a train blocked all railroad crossings from Martin Luther King Jr. Boulevard to Fourth Street for about 30 minutes, forcing Breland to have to drive down to Highway 43 North and come back to Beech Street so he could get across the tracks.
Breland requested a letter be sent to whoever can help rectify the matter, and that his concern and request be added to the minutes.
The next Council meeting will be Oct. 6 at 5 p.m.

The upcoming General Election has three major measures on the ballot that will affect the entire state of Mississippi, including... read more