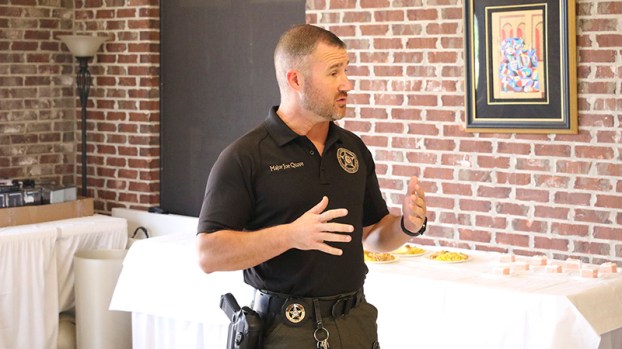 A brief overview of firearm laws in Mississippi

In an effort to dispel some of the rumors concerning concealed carry in the state of Mississippi, a member of the Pearl River County Sheriff’s Department gave a brief overview of the laws to members of the Exchange Club of Picayune recently.
During his presentation Maj. Joe Quave said he would only have time to go over the very basics, being cautious to say that the laws are at times complicated and require more than an hour or two to cover in depth.
As such, his 30 minute presentation was to be taken as a quick rundown and referred anyone with questions to review the state’s codes pertaining to firearm use for more information.
While Mississippi residents should get a permit, they are allowed to carry a weapon in a concealed manner without one. According to 45-9-101 (24) “A license under this section is not required for a loaded or unloaded pistol or revolver to be carried upon the person in a sheath, belt holster or shoulder holster or in a purse, handbag, satchel, other similar bag or briefcase or fully enclosed case if the person is not engaged in criminal activity other than a misdemeanor traffic offense, is not otherwise prohibited from possessing a pistol or revolver under state or federal law, and is not in a location prohibited under subsection (13) of this section.”
A person’s vehicle is considered an extension of their home, and as such residents can legally carry a weapon in their vehicle. Any person wanting to purchase a firearm has to be 21 or older. Quave said that while concealed carry is technically legal in Mississippi, there are restrictions, such as the inability of residents to carry a concealed weapon in courtrooms, law enforcement agencies, jails and other “places of nuisance.” He advised responsible firearm owners to consider getting an enhanced concealed carry license, which allows people to carry a firearm in some of those places, such as a courtroom when court is not in session. However they will still be unable to carry a firearm into a law enforcement agency or jail. Formal training is required to obtain an enhanced concealed carry license.
If a business has a sign posted on the storefront advising people not to carry firearms within, it would be considered trespassing if they brought a firearm inside anyway.
Additionally, laws concerning the carrying of firearms vary by state, so if a Mississippi resident plans to travel to another state, Quave advised them to check that state’s laws before bringing a firearm.
He also quickly outline instances when a person is within their rights to protect themselves, and when it could mean facing felony charges. If a person feels their life is in danger, especially if they are within their own home, they have the legal right to protect themselves with force. That includes their vehicle that they are occupying. However, shooting a person who is not posing such a threat will result in legal action.
However, Quave reminds residents that when a person is in stressful situations, their heart rate elevates, affecting that person’s accuracy with a firearm.
Quave advised people to not go straight for their weapon if they see a situation escalating, especially if they are not directly involved in the dispute. Instead, he suggests to be a good observer.
“Consider being a good witness before pulling a gun,” Quave said.
Quave also quoted Mississippi Codes 97-37-1; 97-37-7; and 97-3-15 for his amended presentation.

Poplarville’s Board of Aldermen outlined the city’s proposed budget for fiscal year 2020-2021 during a budget hearing held Thursday. The... read more