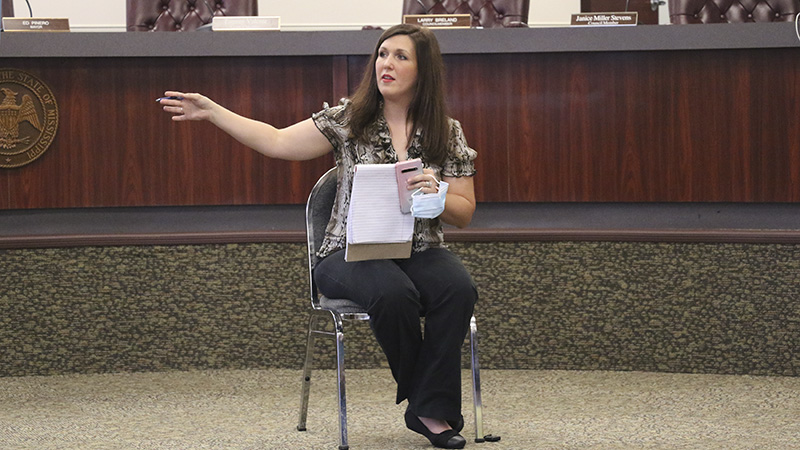 BUSINESS IN UNUSUAL TIME: Picayune Municipal Court Clerk Lisa Albritton updates members of the City Council about how court proceedings have been held during the COVID-19 pandemic during a budget workshop held Wednesday. Photo by Jeremy Pittari

Picayune will operate off a budget much like last year’s, but some department heads made minor requests to meet certain needs.
City Clerk Amber Hinton started last week’s budget workshop meeting with some accomplishments, including the approval of a contract to pave streets citywide, an adjustment to the city’s mowing contract that took cutting of the cemeteries off the hands of city employees, and consolidation of the city’s dispatch system with the county. All inmates previously held in the city will also now be held at the county jail.
Additionally the results of the vote to determine the percentage of Mississippi Power Company’s franchise fee was certified. The vote kept the current rate at 3 percent, instead of lowering it to two percent, and kept industrial companies in the list of qualifying accounts that would generate that revenue for the city. Hinton said that if the vote failed, the city would have lost $175,000 in annual income.
A step increase of about 2.5 percent for city employees was included in the budget proposal and the rates for employee insurance policies received a rate hold.
However, the effects of the pandemic mean Hinton reduced the anticipated sales tax collection by 3.5 percent. Due to the reduction, she now anticipates the city receiving an average of $384,000 per month in sales tax instead of last year’s estimate of $397,000.
She also budgeted about $100,000 for continued litigation concerning the construction of the addition to City Hall. That litigation concerns a flooding issue that occurred when heavy rains fell shortly after the building was complete. Hinton said the city has already spent $140,000 in legal fees, but a trial date is tentatively set for sometime in November.
In the public works department, Eric Morris asked for a new skid steer, expected to cost $70,000, to allow his employees to clear out a number of right of ways. He also asked for the purchase of a $13,000 piece of tremble equipment that will assist in the location and mapping of utility lines in the city.
Morris said the equipment will be accurate within three feet and enable city personnel to find utility lines faster when repairs are needed. He said the equipment is needed due to the incomplete nature of the city’s current maps. The tremble will be combined with a working agreement with Dungan Engineering, at a monthly expense not to exceed $2,500, who will update and modernize the old maps based on data collected using the tremble.
In all, Morris asked for $139,000, which also included a half ton truck and one ton truck to replace aging equipment, and $12,000 to hire a part time employee to help the grounds and beautification department keep the city’s flower beds pristine.
Code Enforcement Officer Tom Milar asked for an additional $3,000 to cover increases in professional services such as legal work, and to help repair issues at the Intermodal Transportation and Tourism Center.
Within the Municipal Court, no additions to the budget were requested. Municipal Clerk Lisa Albritton said she has been able to employ a number of free services to meet the needs and legal requirements of her office during the pandemic, such as live streaming court proceedings to keep the number of people within the court down and use of an application that allows staff to meet remotely when they have to.
She’s also been able to keep collections steady, if not up slightly. She said that last year she collected about $334,000, but so far this year that amount has totaled about $353,000. Albritton said that by allowing people to pay small amounts the collections have remained steady.
Administration within the Fire Department requested $36,000 to purchase a replacement for an aging cascade system, which is used to refill tanks used by firefighters to help them breathe while fighting fires. Chief Keith Brown said there are about 30 bottles department wide, that cover the 33 full time firefighters. Only 11 firefighters are on a shift at a time. Brown said the department also has five employees working in administration.