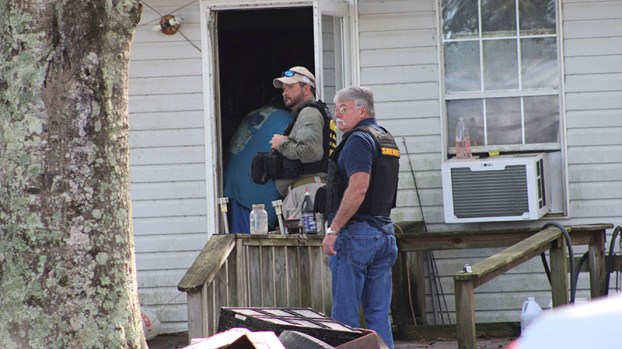 Sheriff David Allison, pictured at right, said that a number of suspects have been arrested after complaints were made of suspected drug activity in the Caesar community. File photo

In response to complaints of suspected drug activity going on in the Ceasar community, the Pearl River County Sheriff’s Department has been conducting an operation in that area to reduce that activity, which resulted in a number of drug related arrests.
Sheriff David Allison said that operation netted more than a dozen suspects, but 8 of them were either arrested or cited for driving violations or arrested for misdemeanor drug violations.
The following are cases that involved felony offenses.
One of those drug arrests took place on July 27, when narcotics investigators conducted a stop on a vehicle for careless driving in the 1000 block of Bouie Road. Allison said the investigator then spoke with the driver, identified as Nicholas D. Wash, 41, of 1605 Adcox Rd. and the passenger, identified as James E. Snider, 42, of 304 Bales Ave. During the stop it was determined that both men had drug paraphernalia in their possession, and a search of the vehicle found heroin inside. Allison said both men were arrested for possession of paraphernalia and possession of heroin. Wash was additionally arrested for careless driving.
Two days later, another stop was conducted on a vehicle because the tag was switched. Behind the wheel was 46-year-old Ricky Wayne Martin of 104 Strain Dr., Carriere. A search of the vehicle located an AR 15 that was later determined to have been stolen, along with drug paraphernalia and a large amount of methamphetamine, Allison said. Martin was arrested for switched tag, possession of paraphernalia, possession of a stolen firearm and possession of methamphetamine with intent to distribute while in possession of a firearm, Allison said.
The next day, a stop conducted on a vehicle for careless driving along West Union Road near Sycamore Road brought investigators into contact with 54-year-old Kirby B. Beall, of 1085 Springhill Rd., Poplarville, and his passenger, 44-year-old Shane C. Seals of 53 American Sand and Gravel Rd., Poplarville.
During the stop, paraphernalia, methamphetamine and evidence of the sale of methamphetamine was found. At one point, Beall was seen attempting to discard some methamphetamine on his person, Allison said.
Seals and Beall were arrested for possession of paraphernalia, possession of methamphetamine with intent to distribute and Beall was additionally arrested for tampering with physical evidence and for a hold with the Mississippi Department of Corrections. Allison said that Seals was additionally arrested for careless driving and driving while license suspended.
On July 31, investigators conducted another stop on a vehicle for reckless driving, this time in the area of Preacher Powell Road. The driver was identified as Rodney “Hotrod” W. Smith, 43, of 1374 John Amacker Rd., Poplarville and his passenger was identified as 33-year-old Gary H. Falgoust of 1346 John Amacker Rd. When the investigator attempted the stop, Smith fled, leading the investigators on a pursuit through the Ceasar community until the vehicle wrecked in a wooded area on Mount Carmel Road. Allison said that after the vehicle came to a stop, both suspects fled on foot, but Falgoust was captured and arrested a short time later for felony fleeing. Smith escaped and is wanted for felony fleeing, so Allison asks anyone who has information pertaining to his whereabouts to call the Sheriff’s Department at 601-798-5528 or Mississippi Coast Crime Stoppers at 1-877-787-5898.
Another stop for careless driving was conducted on July 30 along FZ Goss Rd., Allison said. During that stop the driver of the vehicle pulled to the shoulder and as the deputy exited his vehicle and asked the driver for his license, the man said he didn’t have one before speeding away. The deputy gave chase in his patrol vehicle as the suspect vehicle ran through stop signs and eventually led the deputy down Anchor Lake Road where the pursuit reached speeds exceeding 90 miles per hour, Allison said.
At one point during the pursuit, the driver lost control of the vehicle, and ended up in a ditch. Allison said that the driver then fled on foot, but deputies caught up to him and arrested him. While deputies pursued the driver, later identified as 28-year-old Joshua Evans Russell of 432 La-Row Rd., Carriere, another law enforcement official saw a female passenger, identified as 42-year-old Keirsten Fisher, also of 432 La-Row Rd., attempt to discard items under the vehicle. Allison said that during the pursuit, Fisher was also seen throwing items from the vehicle, which were later recovered. Two other people were in the vehicle at the time of the stop, but were later released.
Allison said that the evidence recovered from under the vehicle and various points in the pursuit ended up being various kinds of illegal narcotics.
Russell was arrested for felony fleeing, resisting arrest, expired tag, driving while license suspended, no insurance, no seatbelt and running a stop sign. Allison said it appeared Russell fled due to having two warrants out for his arrest for previous driving violations. Fisher was arrested for possession of cocaine, littering, tampering with physical evidence, possession of suboxone and possession of paraphernalia.
As part of an unrelated operation, 35-year-old Saul D. Rogers of 259 Hattie Winston Rd., Lumberton was arrested for drug violations on Aug. 5. Allison said that investigators were speaking with Rogers in the driveway of a home on Moody Street that day when they noticed methamphetamine in his vehicle. A search of the vehicle found marijuana, methamphetamine and heroin along with a set of digital scales and plastic bags commonly used in the distribution of narcotics. Allison said that Rogers was arrested for possession of marijuana with intent to distribute, possession of methamphetamine with intent to distribute and possession of heroin with intent to distribute.

Poplarville’s mayor was diagnosed with COVID-19 Friday after driving a school bus for the first two days of the semester.... read more