Picayune School District to get solar panels from grant 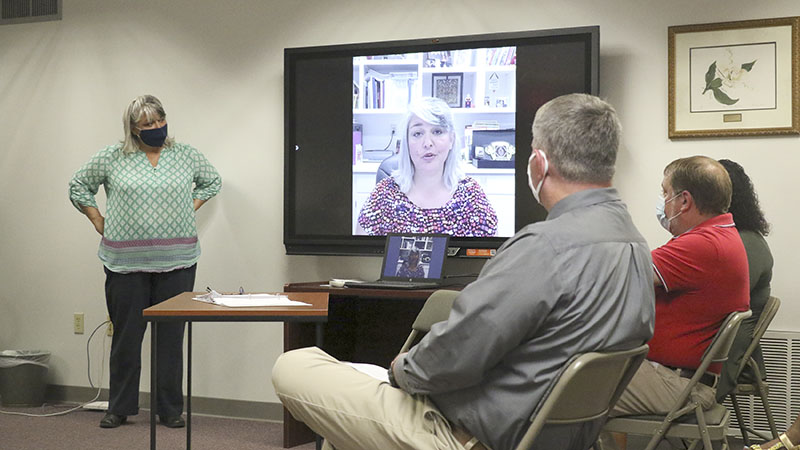 WELCOME BACK: West Side Elementary Principal Kerri Wilder, left, shows the Picayune School District Board of Trustees a video she made welcoming students to their first day of school. She and her staff made several videos so the students would be prepared for their return to class. Photo by Jeremy Pittari

Picayune School District’s Board of Trustees heard about the success of the summer feeding program, videos that prepared students for the first day of school and approved a grant program that will install solar panels near one of the district’s cafeterias.
Over the summer, the Picayune School District provided meals to hundreds of thousands of children, some of which came from as far as Pearl River, La.
Debbie Byrd, the district’s food service director, brought managers from each campus’ food service department to Tuesday’s School Board of Trustees meeting to update the Board on the number of meals served. She said that during the summer feeding program, staff served 198,241 meals, which was about double the number of meals served last summer.
Board President Frank Ford said he passed by the campuses serving the meals and noticed that the staff worked hard, even in the summer heat.
Various businesses and parents also noticed the hard work of the staff and in a show of support brought cases of bottled water, sports drinks, pizza and various other items.
Superintendent Dean Shaw said the most important thing the food service personnel provided to the children were loving smiles.
In other business, the Board heard from West Side Elementary Principal Kerri Wilder, who showed the Board some videos she and her staff created to help prepare students for their first day of school.
Only students and parents have access to the videos through an invitation process, Wilder added.
In the videos, Wilder and her staff gave virtual tours of the campus so students could find their respective classrooms, while another video outlined how meals in the cafeteria would be handled during the current pandemic.
This year, all staff have custom made aprons, instead of the typical spirit T-shirt. Wilder said the aprons help keep the children and staff safe during instances when a child wants to get a hug from one of the staff.
“No matter what you’re going to have contact with kids….We didn’t want to have to tell a child to backup and ‘don’t hug me’ and make them feel bad about themselves.” Wilder said.
Inside the pocket of the aprons is hand sanitizer and the aprons are washed daily.
Shaw added that each school’s staff made videos for their children as well.
The Board also discussed a grant program with the Gulf Coast Community Foundation and Mississippi Power Company that will install solar panels near the Junior High School’s cafeteria.
Those solar panels will be installed on top of covered walkways and provide power to the cafeteria to help reduce the district’s power bill while providing shade for students and staff walking between the cafeteria and the Career and Technology Center.
Byron Hill with Mississippi Power Company said that the grant will be for $250,000, of which the district will have to kick in $3,333. Chris Landry with Landry and Associates said he will design the covered walkway and solar canopy and then turn the project over to electrical engineers who will install the system.
The only caveat of the grant is that the school district can’t produce more power than is used, so it won’t have the ability to feed electricity back into the power grid. Landry said the panels will produce 67 to 80 kilowatts of electricity during sunny days, which amount to enough power to provide electricity to one or two households.
When asked, Finance Director Lisa Persick said the school district pays about $40,000 per month in electricity costs across all campuses. Hill said he expects the district to save about $1,200 a month once the solar panel array is installed.
Landry said that the grant requires the panels be connected to the Internet so they can be used by science teachers as part of their curriculum.