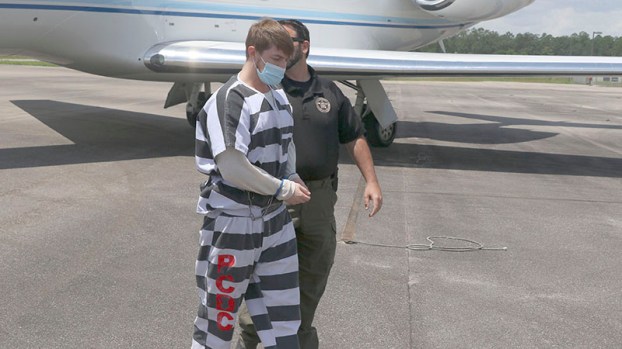 Dustin Gray is escorted off a private plane after being extradited back to Pearl River County from Colorado. Photo by Jeremy Pittari 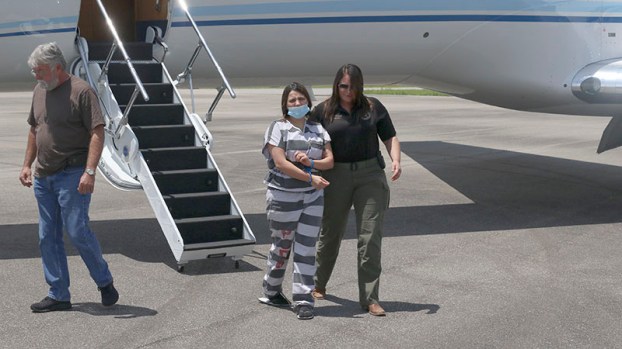 Erica Gray is escorted off a private plane after being extradited back to Pearl River County from Colorado. Photo by Jeremy Pittari

Dustin Gray and his wife Erica Gray are back in Pearl River County after being arrested in Colorado. They are being held for their alleged involvement in the murder of Willie Jones.
The pair, who are suspects in the murder of 28-year-old Willie Jones, were flown by private plane into Picayune from Colorado Sunday morning just before noon.
As both were unloaded off the plane donning face masks and cuffs, they each displayed the middle finger as they were escorted down the stairs before being placed in separate vehicles. They were initially arrested on July 17 in Colorado on warrants for possession of stolen firearms, but were persons of interest at that time in the disappearance of Jones, who was last seen alive on July 6.
After Dustin, 24, and Erica, 21, were captured, investigators found the remains of a man later identified as Jones in wooded hunting land along Texas Flat Road on July 17. That same day, 18-year-old Austin Brookshire, Dustin’s half brother, was arrested on a warrant for murder.
The following week, an unidentified juvenile was also arrested for a warrant for accessory after the fact of murder.
On July 21, Dustin was served with a warrant for first degree murder in relation to the death of Jones, and Erica was arrested on a warrant for accessory after the fact of murder.
Monday, the husband and wife were brought before Justice Court Judge Donald Fail where he denied bond to both of them. During the initial appearance before Fail, both suspects said they had no job, and no assets to speak of. Dustin Gray told the judge that he does own a car, and estimated its value at $5,000.
According to an affidavit filed in Justice Court after Monday afternoon’s hearing, the murder of Jones was a “pre-conspired scheme to shoot and rob Willie.” The affidavit states that Jones would at times carry between $10,000 to $40,000 in cash with him on his person or in a shoebox.
Erica is facing the charge of accessory after the fact of murder because of her involvement in helping to clean Dustin’s vehicle after Jones was shot in it in the Ceasar community, the affidavit states.