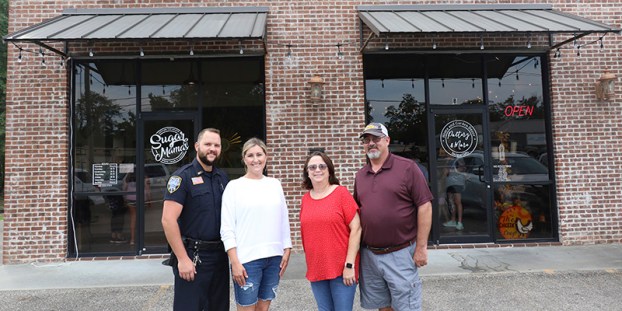 Teamed up: Within Picayune, two businesses have taken down the dividing wall to team up and provide a unique shopping experience. From left are Bo Moeller, Cobi Moeller, Jackie Bellanger and Bob Bellanger. Jeremy Pittari | Picayune Item

Within Pottery and More and the adjoining Sugar Mama’s Cakery, faith, family and friends are the keys to their success.

Colbi Moeller is the owner and operator of Sugar Mama’s, which started as a home based business that grew into a location along Highway 11. Moeller said she’s been baking professionally for about 10 years, and came up with the name for her business because she’s the mother of four. Originally, when she moved into the retail location in 2017, her business occupied two suites in the retail building.

Jackie Bellanger, owner of Pottery and More, is no stranger to running a business in Picayune. Back in 2009 she opened the first iteration of Pottery and More in the same building, but just a couple suites down. She said she had to shutter the business four years later due to a stumbling economy, but this year got the idea to open it again. Bellanger and Moeller became friends by attending the same church, and during a conversation Moeller mentioned she had too much space and proposed a collaboration of both businesses.

In March, just before the COVID-19 pandemic struck, Pottery and More took Moeller up on her offer and opened in the suite next door to Sugar Mama’s Cakery, with a modified layout that allows customers to peruse both businesses’ goods without leaving the comfort of the air conditioning so necessary in South Mississippi summers.

Now, both businesses benefit, since customers bleed over to the other’s store.
Customers of Sugar Mama’s come for the custom cupcakes, cookies and fresh made lunch items, while customers of Pottery and More come for the high quality pottery, decor and gifts that can’t be found in big box retail chains; and they come from as far away as neighboring states. While perusing the wares, customers are treated to a hodge-podge of aromas that include fresh made baked goods combined with burning homemade candles.

Renovation of the two suites was headed up by Moeller, employing repurposed lighting and removal of the adjoining wall to create a unique shopping experience.

Since the pandemic has reduced the number of wedding cakes and other special orders that previously made up the majority of Moeller’s revenue, now lunches, pastries and custom cupcakes fill the majority of her time, she said. Her most unique item is the Monte Cristo sandwich, but the chicken salad sandwich on croissant and buffalo ranch wrap are also popular items. Other menu items include homemade pimento cheese, spinach and artichoke BLT and salads.

Within Pottery and More, customers won’t just find quality pots made from clay, but also various décor items, specialty gifts and homemade candles.
Since Bellanger is a full time nurse for the Picayune School District, most customers will find her husband Bob behind the counter until school lets out. He’s willing to not only help them find the right gift, but provide assistance in loading it into a vehicle when the item is too large or heavy.