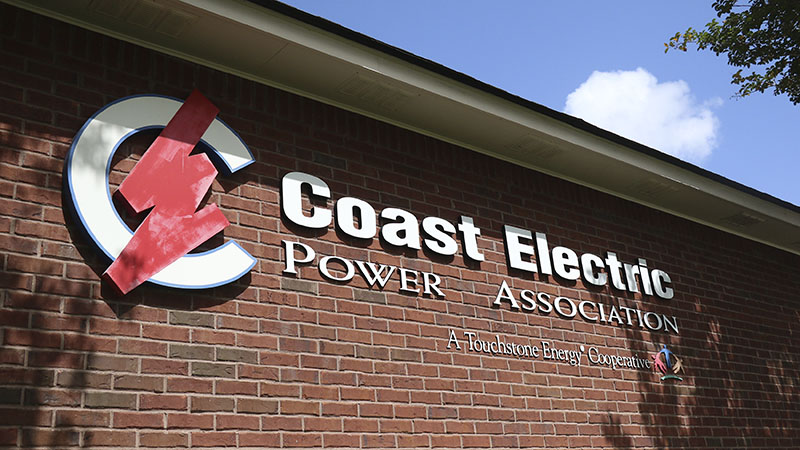 COMPETITION: As part of a grant from the Public Service Commission funded by the Mississippi Electric Cooperatives Broadband COVID-19 Act, Coast Electric is working to provide high speed broadband Internet to residents in the north end of Pearl River County. Photo by Jeremy Pittari

To help fill in gaps in available broadband service within the north end of Pearl River county, Coast Electric received $5.4 million in grant funding to build a fiber optic network to homes connected to the Derby and Crossroads substations as part of a broadband pilot project.
Director of Communications April Lollar said the pilot project associated with this grant will only focus on those northern areas of the county, but the cooperative is reviewing the possibility of offering broadband service to all of the company’s customers in Pearl River, Hancock and Harrison counties. That will be dependent on how the customers vote in the next few weeks and subsequently if the board of directors determines building such a network would be cost effective.
The pilot project will have to be built out fast, with an anticipated completion date of by the end of this year. Rates and speeds for the pilot project rival current Internet provider offerings in this area. For 100 mbs service, the rate will be $54.95 per month, plus applicable taxes. Or customers can opt for 1 Gbs for $84.95 per month, plus tax. Those speeds are for both upload and download, the prices include the router and there will not be a data cap. No other provider in this area offers those speeds at those rates, much less without a data cap.
While the power company received $5.4 million in grant funds to fund the pilot project, it is estimated that the power company will need to pay an additional $9.9 million to complete it. Lollar said Coast Electric employees are already in the process of mapping the area of Derby and Crossroads in preparation to install the necessary fiber. Coast Electric employees will perform the work to complete the pilot project as well.
Any customer of Coast Electric within Derby and Crossroads should visit https://coastepa.com/broadband-pilot-interest/ to fill out the form and express interest in receiving that service.
The funding was awarded to Coast Electric Power Company by the Mississippi Public Service Commission, which was provided as part of a total of $65 million from the Mississippi Electric Cooperatives Broadband COVID-19 Act, according to a press release from the Public Service Commission. A total of 15 electric cooperatives across the state received funding for the same purpose.
Coast Electric is also looking into the possibility of providing broadband service to all customers in the three counties it currently serves.
To gauge public interest, Coast Electric is asking all members to cast their proxy ballot, which includes whether the power company should review the feasibility of offering the service to all members. To cast a ballot visit https://www.directvote.net/CEPA/login.aspx?ReturnUrl=%2fCEPA%2f.
Lollar said that members who cast their ballot will be voting on a proposed amendment to the company’s Certificate of Consolidation. That amendment states that the company will determine the feasibility to provide broadband service on its own or in collaboration with a “partner already in the broadband service industry.” So far, participation in the proxy ballot has exceeded previous years, Lollar said.
All votes need to be either mailed in or cast via the website by Aug. 20. Attendance of the annual meeting where in-person votes can be cast, will be limited due to the current pandemic. The votes will be counted by a third party after the Board’s meeting on Aug. 25.
While the pilot project will be completed in a timely manner, Lollar said providing broadband to customers in three counties will be a much longer process if it’s approved. Rates for broadband as part of the proposed larger coverage area are still to be determined, Lollar said.
No current customers of Coast Electric will see a rate increase as part of the broadband pilot project, or, if it’s approved, the availability of broadband to customers in all three counties.
She compared the pilot project to the spread of electric service in rural areas of Mississippi decades ago.
“It’s exciting to be part of something like this,” Lollar said. “Most Coast Electric employees are customers. We want the (broadband) service as well.”