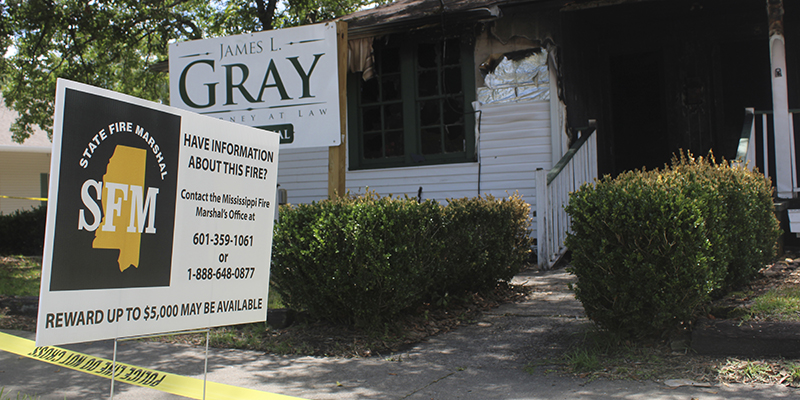 The state fire marshal is offering a potential monetary reward for information on the law office fire on Canal Street. Photo by Cathy Cook.

The State Fire Marshal is offering a potential monetary reward of up to $5,000 for information about the fire at the law office of Jim Gray. Arson dogs have indicated that the fire was set intentionally, said Picayune Fire Marshal Pat Weaver.

The Picayune Fire Department responded to the fire at approximately 3 a.m. Tuesday. Weaver is assisting the State Fire Marshall in the ongoing investigation of the fire. The arson dog indicated that it was an incendiary fire, meaning it was set intentionally.

Gray said he believed that the fire was set intentionally because Gray’s son is a person of interest in the disappearance of Willie Ray Jones, who went missing July 6. Gray said that people on social media were accusing him of hiding his son.

Dustin and Erica Gray are persons of interest in the disappearance of Jones. The couple were taken into custody Wednesday in Pueblo County, Colorado for possession of stolen firearms.