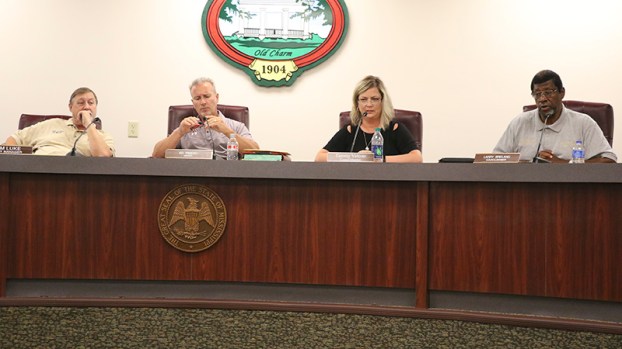 Center from left, Mayor Ed Pinero and Councilor Tammy Valente sit next to each other in a previous Council meeting held before the ongoing pandemic forced the most recent meetings to take place via teleconference. File Photo by Jeremy Pittari

Picayune’s City Council discussed several projects that will improve or repair various aspects of the city’s infrastructure during Tuesday’s telephonic meeting.
Two new roads created as part of the construction of a roundabout connecting Richardson Ozona Road and Highway 11 now need names.
Four names for the two new roads, all based off of prominent people who have had an impact on the community in the past, were suggested, but not named during Tuesday’s meeting. Mayor Ed Pinero said the roads need to be named for E-911 addressing purposes, and entail the small section of road leading from Highway 11 to the roundabout on Richardson Ozona Road, and the small section of road coming from Richardson Ozona Road that connects to the road that enters the Coast Electric Power Company storage yard near the Picayune Item’s office space.
Since Tuesday’s meeting was held via teleconference, Pinero suggested discussing the matter when the Council could meet in person. A motion was passed to table the matter until that meeting can be held.
The Council also discussed applying for Gulf Coast Restoration Funds to pay for three proposed projects, which include Friendship Park improvements, an intersection improvement project near Walmart and development of infrastructure to allow for the creation of a retail center along East Jerusalem Avenue.
During discussion of the matter, Councilor Tammy Valente said she sought an opinion from the Attorney General’s office to gauge whether she would have to recuse herself from making a motion on the East Jerusalem Avenue project as she did a year ago when it was first discussed. During last year’s meeting, Valente said she recused herself because she is a member of the church that intends to construct the retail center, Resurrection Life Church.
Mayor Ed Pinero asked Valente why she felt the need to recuse herself in the first place, which led to a tense back and forth between the two that ended with Pinero saying he would not recuse himself from a city matter if it involved a church he was a member of. Valente said it was her choice to get the opinion and he could make his own choices, to which Pinero responded, “It’s about time you did, good for you.”
In the end, the Council approved a motion to apply for the funding.
The Council also approved a motion to hold a special election concerning Mississippi Power Company’s franchise fee. That election will be held on August 4 and Mississippi Power Company will pay for the cost to hold the election. Currently, Mississippi Power Company is paying the city 3 percent of the rates collected annually for all residential, commercial and industrial customers, totaling about $500,000 per year, said City Clerk Amber Hinton.
During the Aug. 4 election, city residents will have the opportunity to decide whether Mississippi Power Company continues to pay 3 percent of all three customer categories, or if that fee will drop to 2 percent of the total collected for only residential and commercial customers. Hinton said the second option would mean Mississippi Power Company would provide nothing to the city collected from industrial customers. No matter the decision, it will be in place for the next 25 years.
A new round of city wide paving is now expected to begin this year after the Council approved a motion to accept a bid from Huey P. Stockstill, LLC totaling just more than $6 million.
That bid includes three alternates that increased the total; $273,516 to pave travel lanes on Goodyear Boulevard, $122,522 to repair intersections along Millbrook Parkway and $306,761 to pave all of Memorial Boulevard, Jonathan Hickman with Dungan Engineering said.
Hickman estimates the paving crew will be ready to start the project in the next month or two.
Public Works Director Eric Morris said the intention is for the city and Pearl River County Utility Authority to repair all known water and sewer leaks respectively before the paving project begins to avoid the need for cuts to the fresh asphalt after the project is complete. However, Morris reminded the Council that there are no guarantees that a sewer or water line repair won’t be needed in the future leading to cuts to the asphalt.

Organizers for Toys for Tots in Picayune are getting a head start on fundraising efforts early this year with a... read more