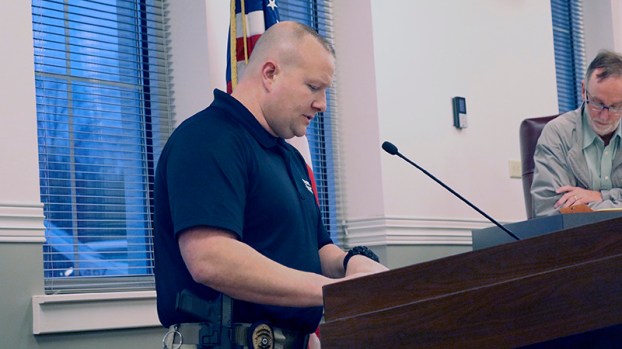 CONSOLIDATION: Picayune’s City Council approved one half of a two part contract to consolidate 911 dispatch services and inmate housing. Police Department Assistant Chief Dustin Moeller, pictured, said the city would still be responsible for any medical costs for inmates who are taken to the hospital. File photo by Jeremy Pittari

Tuesday night, Picayune’s City Council held a telephonic meeting where all members approved a motion to enter into an interlocal agreement with the Pearl River County Board of Supervisors to house the city’s inmates in the county jail, but tabled entering into an agreement concerning the consolidation of 911 dispatch services.
The Council tabled the agreement for dispatch services because a revised contract was sent to the Council just before Tuesday’s meeting. City Clerk Amber Hinton said the revised contract was received at 4:20 p.m. Tuesday, so Council members had not yet had an opportunity to review it.
City Attorney Nathan Farmer said the additions made to the contract appear to be an increase of $40,000 to the figure the city would have to pay as part of the agreement. Farmer said that the city’s financial personnel determined the city’s portion of the required 42 percent for the service, which was determined based on call volume, totaled $345,000. However, the county sent a figure of $385,000 in the revised contract.
The decision was made to table the matter until it can be discussed further. Councilor Wayne Gouguet suggested holding a special call meeting as soon as the negotiation between Farmer and county attorney Joe Montgomery has concluded to address just that matter. A motion to that effect was approved unanimously.
The Council did approve a motion concerning entering into an interlocal agreement that would allow the county to house city inmates at a rate of $20 per day. That rate would cover food and housing per inmate. The agreement includes a 90 day probationary period where the city has the option to end the agreement if issues are found.
When asked, Hinton said she estimates the cost to the city for the county to house its inmates for those 90 days to be $16,000.
If the probationary period is successful, the contract would last for one year, Hinton said.
Picayune Police Assistant Chief Dustin Moeller said the contract cost does not include any medical costs for inmates if they are brought to the hospital.