Bridge to Gumpond under construction 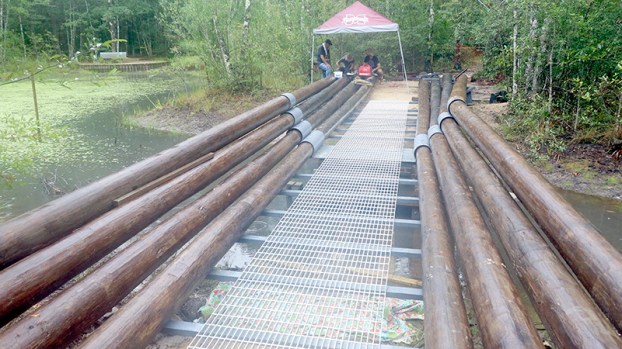 A new bridge is under construction at the Crosby Arboretum’s Gumpond exhibit. Photo by Jeremy Pittari 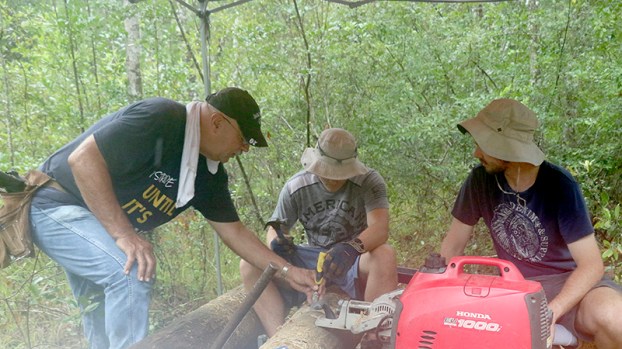 From left, volunteer Frank Jackson provides some advice to Mississippi State University architecture students Spencer Cumings and Ben Gunter as they chisel away at the cresote poles used in the bridge’s construction to make metal fittings connect properly. Photo by Jeremy Pittari

For the past month and a half, a unique bridge has been under construction in the Gumpond exhibit of the Crosby Arboretum.
Comprised of creosote poles and steel, the bridge was designed by Mississippi State University architecture professor Hans Hermman about two years ago.
It is being built in the shadow of another addition to the Arboretum, the Rosen Memorial Pavilion, a structure constructed in the memory of the late Yvette Rosen. She was a long time member of the Crosby Arboretum’s Board of Directors, said Grounds and Maintenance Director Terry Johnson.
Two interns from MSU’s architecture undergraduate program, Ben Gunter and Spencer Cumings, have spent the last two weeks helping Johnson and Arboretum volunteer Frank Jackson in the construction of the bridge.
During their time helping with the project, Gunter and Cumings said working on the bridge has given them some hands-on experience in how a project comes together on the worksite and gives them a better idea of what to include while planning a project to give the contractor all the information they need to complete construction of that project with minimal questions to the designer.
Jackson said the interns have learned that creosote poles, which are typically used to support utility lines above the ground, are not uniform. When used in a construction project that requires perfection, the poles need to be modified to ensure the metal parts of the project fit as required to ensure structural stability.
Johnson expects to be able to hold a ribbon cutting for the entire Gumpond exhibit, including the bridge and pavilion, on Oct. 1.