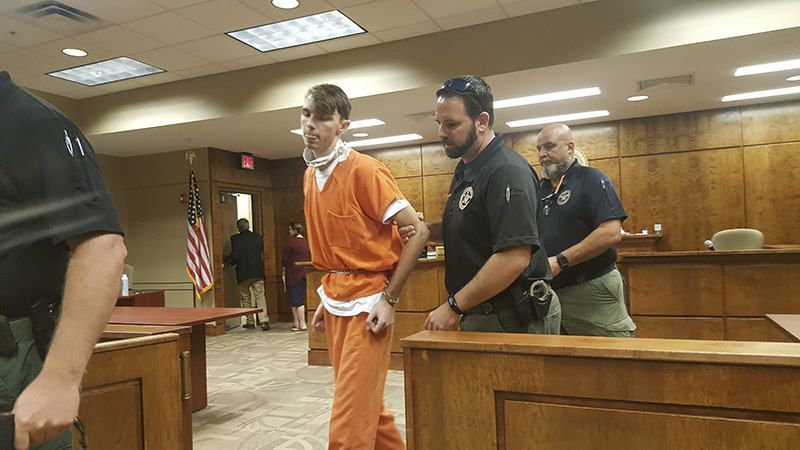 Austin Brookshire, 18, is one of four suspects who have been arrested in relation to the investigation of the disappearance of Willie Jones. Photo by Jeremy Pittari

An affidavit filed in Pearl River County Justice Court provides several details collected in the investigation of the disappearance of Willie Jones, 28, of Picayune.
The court documents are filed in that court as part of an arrest warrant issued for 18-year-old Austin Brookshire of Rankin County, who was arrested on July 17 for murder for his alleged involvement in the disappearance of Jones. Tuesday, a detective read the document in a quiet manner to Justice Court Judge Ben Breland, who later decided to deny bond to Brookshire and appoint him a public defender.
In the document, it’s alleged that on July 6, family reported Jones as missing, saying the last time he was seen was in the company of 24-year-old Dustin Gray when they left Jones’ home to “purchase illegal narcotics.”
Gray initially told investigators that Jones declined to ride back with Gray. In interviews with several other people, the affidavit states, it was determined that Jones had a large amount of cash in his possession that he would keep on his person, or in a shoe box. The total amount of cash Jones had on hand at the time of his disappearance is estimated to be between $10,000 and $40,000.
While speaking with staff at a local tire shop, the detective learned that Gray had come to the shop between noon and 2 p.m. on July 6, to ask for his gray Hyundai Elantra to be cleaned. Staff told the investigators that the vehicle was very muddy and staff noticed signs of blood between the back seats and under the back seats. Staff also noted a portion of the front bumper was missing and what appeared to be two spent shell casings were seen inside the vehicle, the affidavit states.
At that point, the staff of the tire shop declined to clean Gray’s vehicle, even after he produced “two large folds of cash from his front pockets,” the affidavit states.
During Brookshire’s initial appearance in Pearl River County Justice Court, Judge Ben Breland asked Brookshire if he had any money to pay for an attorney. Brookshire said in a quiet voice that he was unemployed and had only $800 in a checking account and was receiving Medicaid benefits. Breland ordered Brookshire to be held without bond and granted him a public defender during Tuesday’s court appearance.
Three other people have been arrested in relation to this case, Dustin Gray, his wife Erica, 21, and an unnamed juvenile.