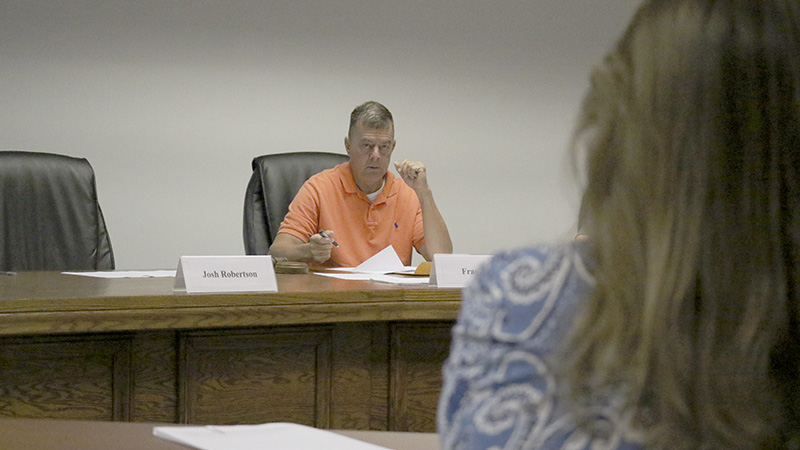 The cost of insurance policies to cover assets and claims within the Picayune School District have increased.
Due to the increase, Stewart Sneed and Hewes Account Executive Justin Ladner was asked to attend the District’s second meeting of the month, held Tuesday morning, to provide some options to bring the rate down.
During Tuesday’s meeting, Ladner said that he was able to review the District’s property valuations and make a couple of adjustments based on when the buildings were built so he could compare them to other buildings within the District.
One such building involves the storm shelter constructed with FEMA funding shortly after Hurricane Katrina. While the building does not belong to the Picayune School District, the District is responsible for insuring it.
Ladner said that he reviewed the agreement and reviewed the current level of insurance for the shelter. He determined that the building was being insured at $300 a square foot, but another building that is similar to the shelter built within a year of the shelter was insured at $175 a square foot.
“There is no requirement on the limit, it just says you must carry hazard insurance,” Ladner said about the contract that stipulates the District insure the shelter.
As a result he changed the level of insurance for the shelter to $175 a square foot.
District Finance Director Lisa Persick said that the cost for all insurance policies for the District in the coming school year total $484,972, an increase from the previous year’s rate of $430,804.
In other business, Persick presented the Board of Trustees with the cost of updating HVAC systems in the District. Since 2018, the District has spent about $857,000 to replace air conditioning systems. In the past the funds to cover that expense came from the District’s fund balance, but Persick said that she checked with the state who said she could use 16th Section interest to help cover some of those expenses. As a result she was able to cover about $400,000 of that expense in April, and expects to be able to cover another $200,000 spent this year through 16th Section interest.