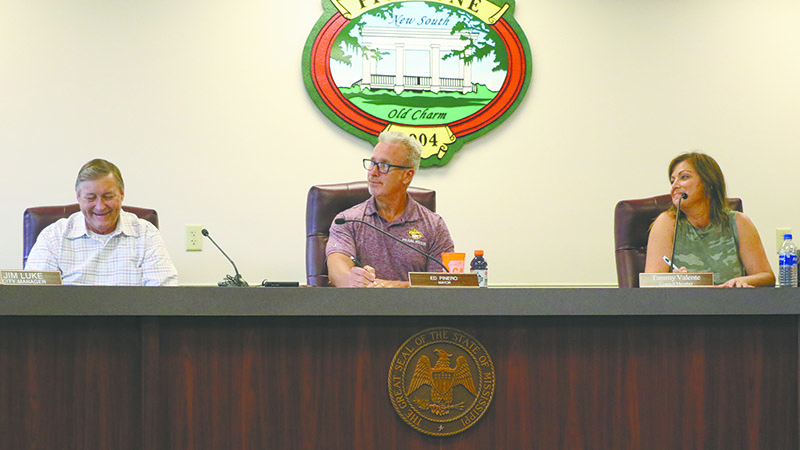 SEMBLANCE OF NORMAL: Picayune’s City Council held its first meeting in the Council Chambers on Tuesday since shelter in place orders were issued back in March as part of the pandemic. Photo by Jeremy Pittari

In what was the first meeting held in the city’s chambers since the COVID-19 pandemic started, Picayune’s City Council approved motions to sell firearms seized by the Picayune Police Department, and approved replacement of fencing at Snyder Park. Two members, Councilors Larry Breland and Lynn Bogan Bumpers, participated in Tuesday’s meeting via teleconference. Previous meetings since shelter in place orders were issued have been held via teleconference.
In relation to the sale of seized firearms, Police Chief Bryan Dawsey said the profit from the sale of the 141 firearms will go toward the department’s drug fund, which is used to purchase supplies for the officers. Last time the department sold seized firearms the profits were used to purchase firearms for the officers in the department.
There are several options to sell the firearms, either through public or private sales or auctions, said Capt. Kerry McGill. He said the department could receive as little as $5 or up to $300 per gun.
In other business, the Council approved a motion to lift the freeze on spending money from cash reserves in order to fund the replacement of fencing at Snyder Park. Public Works Director Eric Morris said via teleconference that the last bids received to conduct the work were for about $9,200. Councilor Tammy Valente said the city should expect to see a five percent increase in the actual cost since building costs have increased since that bid was received.
Morris said the project will entail replacing 932 feet of four foot high commercial chain link fence. Gates will be added where there were previously only openings in the fencing.
City Clerk Amber Hinton said the money to pay for that work will have to come from cash reserves since it was not budgeted. In order the approve the matter, the Council also had to lift a freeze on spending from cash reserves. The matter passed unanimously.
At the end of the meeting, Mayor Ed Pinero thanked the Police Department’s administration and Councilors Breland and Bumpers for maintaining good race relations which have ensured that recent violent protest incidents such as those in larger cities have not occurred in Picayune.
Pinero also said that a prayer vigil will be held Thursday at 8 a.m. in Crosby Commons as a substitute for the National Prayer Day missed due to the COVID-19 pandemic. Pinero said the vigil will support local law enforcement agencies.
In other business the Council:
— Approved a motion to continue the declaration of emergency as part of the pandemic.
— Approved a motion to enter into a lease agreement with Vincent Cheshire for the lease of a T-hangar at the Municipal Airport.
The next Council meeting will be June 16, at 5 p.m.