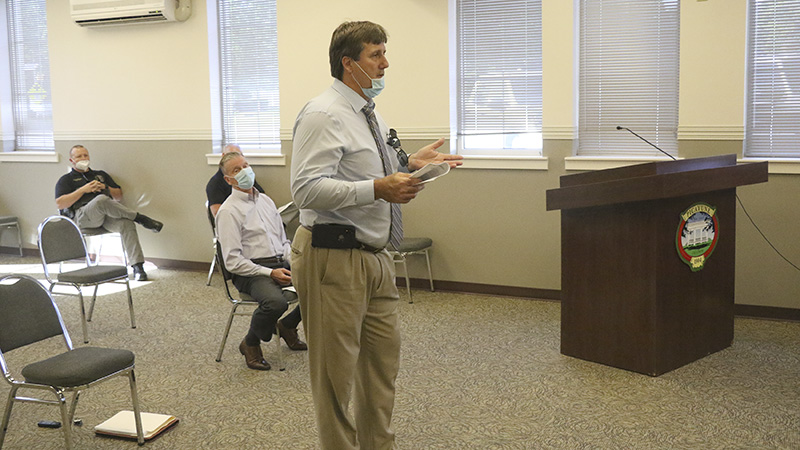 Members of Picayune’s City Council heard a request from County Administrator Adrain Lumpkin to move the process forward in regard to consolidating 911 services across Pearl River County.
As was previously reported, there are currently two 911 dispatch centers within this county, one that is manned by Picayune Police Department personnel for that department’s officers, and another with the Pearl River County Sheriff’s Department, who also provides dispatch services to the Poplarville Police Department. When a call is made to 911 via landline, calls made within the city automatically go to Picayune’s dispatch center, but when a call is made within the city limits via cellphone, the call goes to the Sheriff’s Department first, before being transferred to the Picayune Police Department. At this point the caller has had to repeat themselves in order to receive the correct law enforcement assistance.
Lumpkin said that when an ambulance is needed, the caller is transferred yet again to that agency’s dispatch center, requiring the caller to repeat themselves once again.
Lumpkin said that discussions about consolidating the dispatch centers goes back as far as when Ed Pinero was city manager of Picayune.
Discussions of the most recent plan go back about a year and a half, which also includes updating the records system. Lumpkin said that the request to update the records system started a snowball effect of requests for other updated systems.
Now Lumpkin said the plan aims to find one vendor who will be responsible for setting up and maintaining all of the new systems. It will include a computer system that is easy for officers to use so they can enter data with a less than four percent margin of error. Training will still be required.
When asked about staffing since two dispatch centers would be consolidated into one at Chimney Square in Picayune, Lumpkin said that he does not expect to see anyone lose their job since both current dispatch centers have job openings.
“I don’t see this as a thing that will put people out of a job,” Lumpkin said.
The new system will be able to alert officers if the person they have pulled over during a traffic stop has a warrant out for their arrest with agencies other than the one the officer works for. Currently, if a Picayune Police officer pulls over a person, they have to ask the dispatcher to check with the Sheriff’s Department to see if that agency has warrants out for the person’s arrest. The new system will bypass that step.
Lumpkin said those extra steps lead to the possibility of human error, and create situations where an officer could be put in harm’s way.
One aspect of the consolidation previously planned had to be cut, however. Lumpkin said a previous plan included creating the ability for officers to check the National Crime Information Center without talking to a dispatcher. But, officers will still be able to fill out reports from their patrol vehicle under the new system.
The City Council is expected to vote on the consolidation during the July 7 meeting, Councilor Wayne Gouguet said.
Once the county has all agencies on board, it will take four to six months to complete the consolidation.