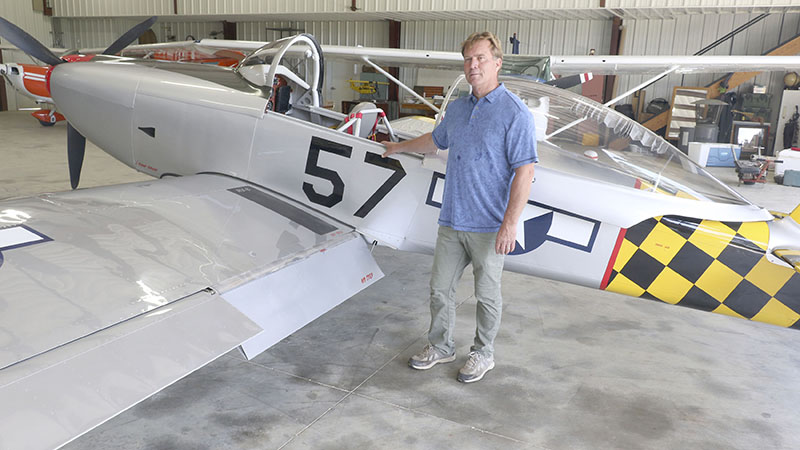 PRACTICE MAKES PERFECT: Troy Ellis, a local pilot, has been adding smiley faces to the sky above his Carriere home for the past several weeks. He said he creates them to practice his sky writing skills. Photo by Jeremy Pittari

For the past several weeks, residents of McNeill and Carriere area have been seeing smiley faces drawn in the sky.
Those works have been made at the hands of Troy Ellis, a local pilot who said he started drawing them over his house in the Carriere area to get some practice at drawing images in the sky. He plans to move on to writing in the sky when his skills improve.
Ellis has been flying planes for the past 20 years, and in 2006 received his license to carry passengers. His flight instructor was John Randall, who was just recently received the Wright Brothers Master Pilot Award.
While he’s not a pilot by trade, Ellis said he typically participates in his hobby at least every day. On his days off, he may draw two smiley faces in a single day.
Residents will see them mostly in the morning or evening because the winds are usually calmer during those times of day. Ellis said it takes him about five minutes to draw each smiley face, which last as long as the winds allow.
He creates these images in the sky using his personal RV-8 plane equipped with a 4.5 gallon oil tank. When he gets to the altitude of 8,000 to 9,000 feet, he starts the oil flowing to the exhaust. The heat of the exhaust causes the oil to smoke while he flies the plane.
The hardest part is creating an image in the sky while not being able to see what he’s drawing. Ellis said it’s mostly a guessing game.