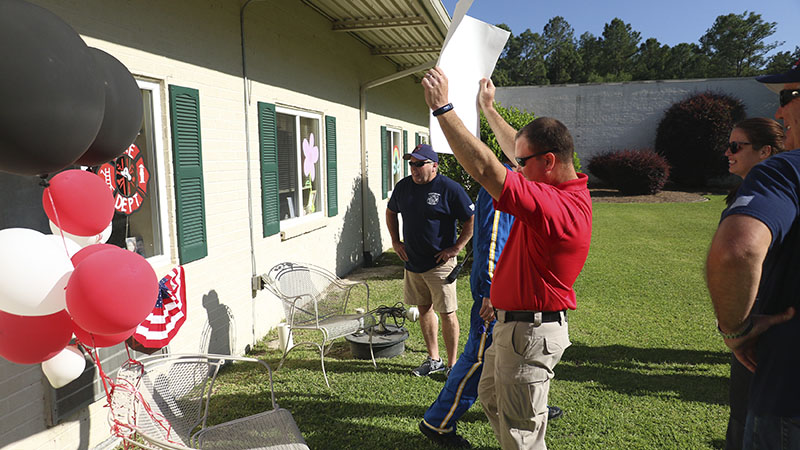 THROUGH THE WINDOW: Southeast Volunteer Fire Department Chief Tony Scharenbroch holds a sign at the window of James Dischinger to show his appreciation for James’ service to the county. Dischinger is fighting COVID-19 and other medical ailments at a local convalescent home. Photo by Jeremy Pittari

Members of just about every municipal and volunteer fire department within Pearl River County showed their appreciation for a fellow member who is fighting COVID-19 for his community service with a parade of emergency vehicles in front of his window.
Southeast Volunteer Fire Department Chief Tony Scharenbroch said that James Dischinger Jr. has been an active member of the fire fighting community since he moved to Pearl River County.
But now, he’s being cared for in a local convalescent home for a number of medical issues, including COVID-19. His wife Theresa said that Dischinger is also dealing with Parkinson’s Disease and Lewie Body Dementia.
Because medical professionals assigned Dischinger to hospice care, the men and women whose lives he touched agreed to participate in the parade to show him how much he is appreciated.
James Dischinger became a member of the Carriere Volunteer Fire Department in 1996. He also joined the Southeast Volunteer Fire Department’s Board of Commissioners in August of 2015.
Theresa said that during his time with the Carriere Volunteer Fire Department, he was instrumental in lowering the department’s fire rating, which currently stands at a 7.
James also placed 3rd in the 40 and older category of the Scott’s Firefighter Challenge in 2016 and served as president of the Board of Directors for Center Water Association, Scharenboch said.
Before retiring to Pearl River County, James Dischinger was a geologist for BP, his wife said.
In recognition of his contributions, one or more engines from just about every fire department within Pearl River County participated in the parade that rolled past the Picayune Rehabilitation and Healthcare Center on Read Road in Picayune.
At the end of the parade, a few of the emergency responders stopped for a moment to go to James’ window to wave and say hello.
Theresa said the outpouring of appreciation shows how the fire fighting community in Pearl River County is a family.
Theresa and James will have been married for 50 years on May 19 of this year.
“I wish he would get well and come home,” Theresa said.