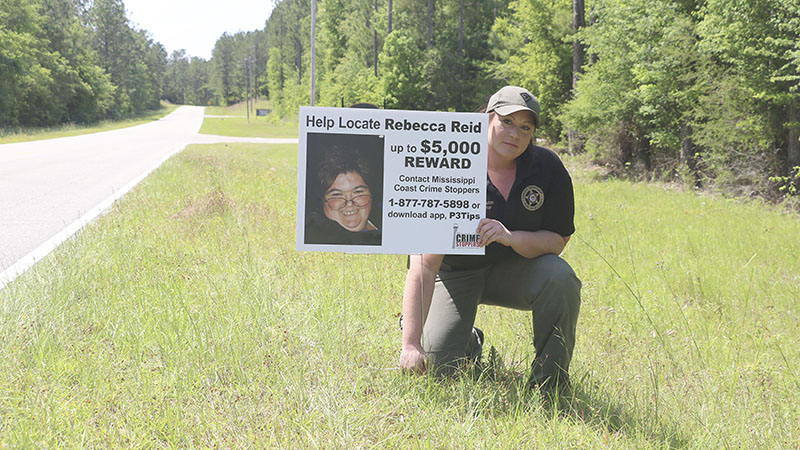 GETTING THE WORD OUT: Pearl River County Sheriff’s Department investigator Brittany Hampton places a sign on a county road alerting the public that a reward is being offered for information that helps locate Rebecca Reid, who has been missing since January. Photo by Jeremy Pittari

The reward for information concerning a missing person case that began back in January has been doubled due to efforts put forth by the family of the missing woman.
Now, a $5,000 reward is being offered for “information leading to the person/persons responsible,” for the disappearance of 32-year-old Rebecca Reid, according to a press release from Mississippi Coast Crime Stoppers.
Crime Stoppers initially offered $2,500, the cap provided by the organization in relation to information for felony cases, but a cousin of Reid’s, Rhonda Cooley, organized a successful effort to raise another $2,500.
Also, Mississippi Coast Crime Stoppers paid to have 20 signs produced that will be placed in the Lumberton and Wiggins area along roadsides and in front of participating businesses, said Maj. Marc Ogden with the Pearl River County Sheriff’s Department.
The case is being led by investigator Brittany Hampton.
Reid was reported missing from her home on Jan. 24, 2020, located at 201 Leetown Road, Lumberton. A white Chevrolet Trailblazer was seen in the area at about the time of her disappearance, but it’s still unclear if the occupants of that vehicle are involved in Reid’s case, the release states.
Reid, who has a mental disability, was last seen in her yard on that day.
Ogden said he would like to thank Mississippi Coast Crime Stoppers for providing the signs and Cooley for raising the additional funds for the reward.
Anyone with information about this case is asked to call Mississippi Coast Crime Stoppers at 1-877-787-5898.