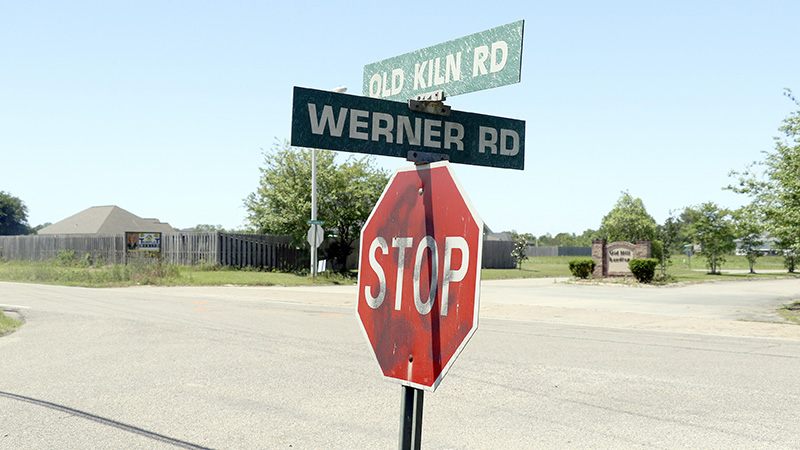 INTERSECTION: A stop sign placed at the intersection of Werner Road and Old Kiln Road stands near the scene where a go-kart and passenger vehicle collided Saturday evening. Photo by Jeremy Pittari

A 10-year-old boy died after being involved in a two-vehicle collision that involved a go kart and a Chevrolet Cruse.
Pearl River County Sheriff’s Department Maj. Marc Ogden said deputies received the call of a collision occurring Saturday evening at about 7:11 at the intersection of Werner Road and Old Kiln Road.
Deputies and other emergency personnel arrived to find that a go kart had been struck by a passenger vehicle on Old Kiln Road.
Initial investigation into the collision determined that a go kart was traveling along Werner Road when the operator turned onto Old Kiln Road. At that point the go kart was struck by a 2012 Chevrolet Cruse.
As a result of the collision, 10-year-old Joshua Summers of Picayune sustained fatal injuries and was pronounced at the scene, said Pearl River County Coroner Derek Turnage. Also injured in the collision was 29-year-old Gregory Nelson of Picayune.
While the incident is still under investigation, Ogden said the information currently at hand indicates Summers was operating the go kart and Nelson was standing on the back of the go kart at the time of the collision. The intersection of Werner Road and Old Kiln Road is a two way stop, where stop signs face Werner Road and Mill Landing Road but does not require traffic on Old Kiln Road to stop.
Nelson was transported to Highland Community Hospital before being transported by helicopter to a hospital in Hattiesburg for treatment of critical injuries, Ogden said.
No charges have been pressed against the driver of the Chevrolet at this time.