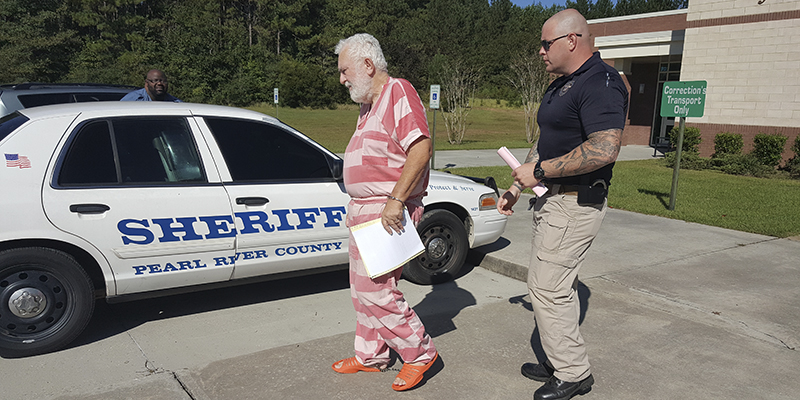 Charles Bowman walks to a patrol car after attending a preliminary hearing in 2018 in relation to the murder of his wife. File photo by Jeremy Pittari

A decision to issue bond to a man being held for the murder of his wife was rescinded recently by the same judge who granted that bond.
Fifteenth District Attorney Hal Kittrell said that the $75,000 property bond issued to Charles Eugene Bowman, 61, in February was rescinded by Circuit Court Judge Prentiss Harrell this month after reviewing the documentation he requested from Bowman.
The documentation requested was meant to show that Bowman owned his property outright. But after Judge Harrell reviewed that paper work, he had concerns that Bowman did not own the property outright, leading Harrell to keep Bowman in jail by rescinding the bond. As a result, Bowman is still being held in the Pearl River County Jail for the 2018 murder of his wife.
That case began after family members called the Pearl River County Sheriff’s Department in June of 2018 to report they had not heard from their mother, Kathleen Bowman, for an inordinate amount of time.
When investigators conducted a welfare check at the Bowman home, located at 68 Owl Hoot Road, Bowman claimed that his wife was not home at that time. Another tip prompted investigators to go back to the home with a search warrant at a later date, previous coverage states. In that search, human remains were found and DNA testing later determined them to be from Kathleen Bowman. Charles Bowman had fled the area prior to the search warrant being served. Charles Bowman was on the run for about two weeks until he was captured at a campsite in Utah.
Kittrell said his staff are diligently working on the case, which is set for trail in Marion County on May 4.