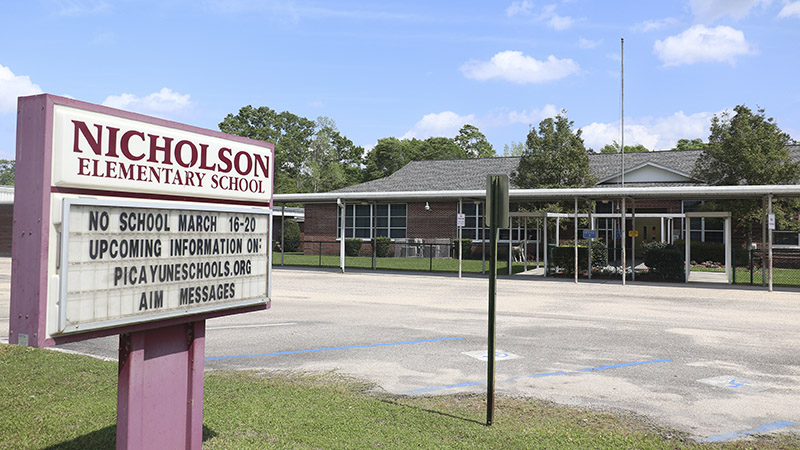 ONE WEEK: A sign in front of Nicholson Elementary announces that school was to be closed for a week in March, but declaration by the Mississippi Department of Education extended that closure into April. Photo by Jeremy Pittari

Members of the Picayune School District’s administration met Tuesday morning to discuss getting resources to students so they can continue to learn from home.
Superintendent Dean Shaw said he expects to get those resources to students “probably” by Monday of next week.
Teachers are currently in the process of getting the resources together, which will include online and physical copies. Shaw said that technology from the school district will not be provided to students. Instead if that student does not have access to technology that would allow them to access the resources via the Internet, the parent can request hard copies of that material.
All material will be emailed to the parent, unless they need physical copies. Parents can request the physical copies when teachers call and the teacher and parent can then work out a method to pick up the physical copies.
Creation of this curriculum for use at home is due to schools being closed in response to the COVID-19 pandemic. Schools were initially closed for the week of March 16 to 20, but the Mississippi Department of Education extended the closure until April 17, according to previous coverage. All state testing, or assessments, has been canceled.