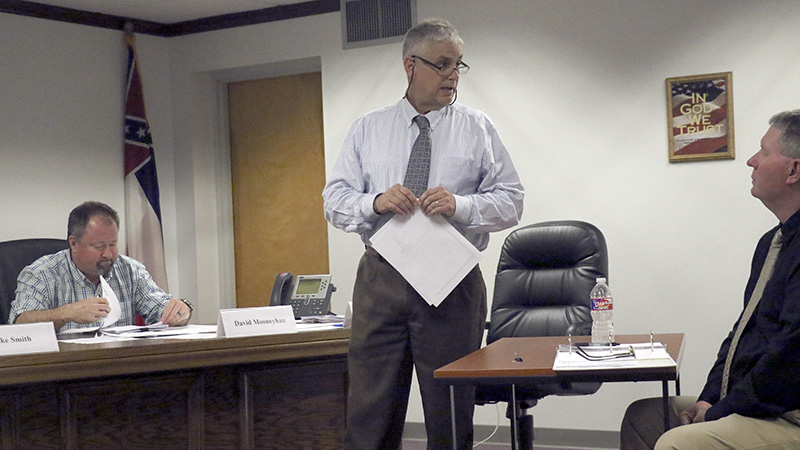 ACHIEVEMENTS: Picayune School District Superintendent Dean Shaw informs the Board of Trustees about awards recently issued to the District during the 2020 Lighthouse School Leader Awards Banquet. Photo by Jeremy Pittari

Members of the Picayune School District’s Board of Trustees elected new officers and heard about achievements during Tuesday’s meeting.
This year’s officers will be Frank Ford as chairperson, Jake Smith as vice-chairperson, Josh Robertson as secretary and David Mooneyhan as second secretary.
Also during that meeting, Superintendent Dean Shaw informed the Board that the district received two 2020 Lighthouse School Leader Awards, one for receiving an overall accountability score of B for the last school year, and another for all campuses receiving a C or higher within a District with 95 percent of the student body being eligible for free or reduced lunch.
Shaw said he would like to thank the teachers, students and administration for their efforts.
Also, Picayune Memorial High School received two Program of Research and Evaluation for Public Schools 2020 Value Added Awards. Principal Kent Kirtland said the high school was recognized with awards in the categories of student scoring in the categories of ACT, U.S. History and English II.
According to the PREPS website, the Value-Added Analysis “allows for valid comparison of educational performance on the prior year’s state testing while considering the impact of differences in socioeconomic background of students considered in the research.”
“School’s deemed as adding value are those performing significantly better than other schools with comparable socioeconomic circumstances,” the site states.
That research is conducted at William Carey University.
In other business, Director of Counseling, Curriculum and Federal Programs Dr. Brannon Johnson presented the attendance belt to West Side Elementary principal Kerri Wilder. Wilder said her campus had an attendance rate of 94.59 percent last month.
The next regular meeting of the Board will be April 14 at 5:30 p.m.