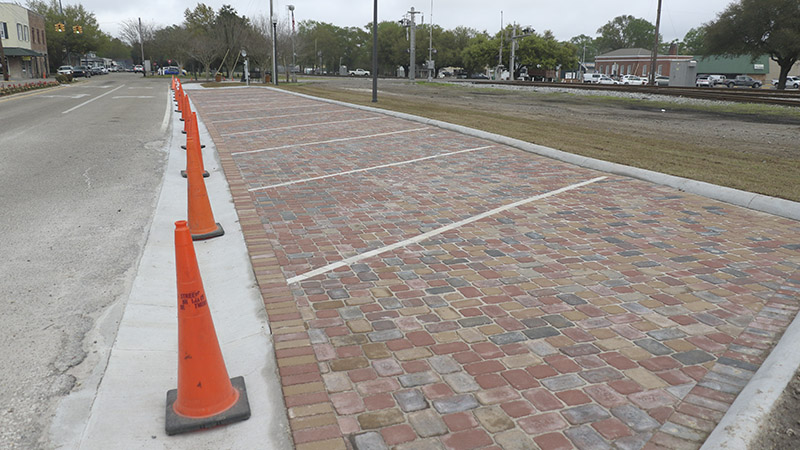 DOWNTOWN PARKING: Twelve more parking spaces will soon be available along Main Street in Picayune as part of a grant provided to Picayune Main Street from the Mississippi Power Foundation. Photo by Jeremy Pittari

A $50,000 grant from the Mississippi Power Foundation provided to Picayune Main Street is being used to beautify the downtown area.
Mississippi Power Local Manager Byron Hill said that the grant was provided to Picayune Main Street, who in turn provided some of that funding to the city of Picayune.
Picayune Main Street combined a portion of the grant with on-hand funding and community donations to pay for facade updates to five local businesses in the downtown area as part of a project called “Making Downtown More Lovable.”
Picayune Main Street Director Reba Beebe said the updates included pressure washing the front of the building before each one received a fresh coat of paint and a new awning.
The city of Picayune is using its portion of the grant to construct 12 new parking spaces along Main Street and remove old signage along West and East Canal Street. Code Enforcement Officer Tom Milar said local business owners can take advantage of the grant to have old signage removed at no cost to them. If they don’t opt in, they will have to pay out of pocket to remove the signage once an amendment to the city’s ordinance is put in place.
Milar said he is currently working on that amendment and expects to present it to the City Council for review in a month or so. That ordinance is expected to be adopted and go into effect within the next six months.
About 11 instances of old or abandoned signage have been identified so far, just on West Canal Street. Milar expects to begin identifying the same issue along East Canal Street and have the entire project completed in about a month.
Construction of the additional 12 parking places along Main Street is nearly complete.
“Strong and vibrant communities are important to Mississippi Power. Our local manager, Byron Hill, saw the need and the Mississippi Power Foundation is proud to be in the position to help the city of Picayune with their ongoing community development initiatives,” said Mississippi Power Community Development and Corporate Giving Manager Brad Bradford.
Hill said that Mississippi Power wanted to partner with Picayune Main Street and local Chambers of Commerce to help make Pearl River County a better place to live.