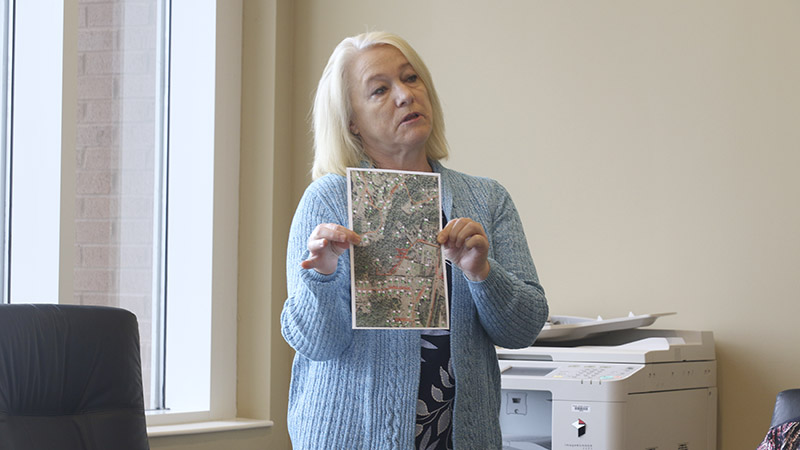 In spite of ordinances and efforts to educate the public, Pearl River County first responders still deal with a lack of addresses being displayed for residential structures while responding to 911 calls.
E-911 Director Carolyn Nelson held a meeting with first responders and members of the media to provide an update on where the county is in regard to enticing residents to ensure their home is properly marked and what efforts are being made to ensure homes can be found easier when an emergency occurs.
Nelson said that there are 1,467 county and 1,347 private roads within Pearl River County, of which 280 still need to be pegged. The process to peg an address involves identifying the appearance of the home, determining what side of the road the home is on and at times including a picture of it. All of that data is being compiled in a system that will help first responders quickly reach a home in an emergency.
At times county employees or first responders on patrol may notice that a home is either not properly labeled, or the address for it is on the wrong side of the road. Addressing systems work to ensure that odd numbered addresses are on one side of the road while even are on the other. If those personnel can alert her office to an error or lack of address, she can contact that individual and work to get the problem fixed.
Nelson said it’s a good idea for residents to let her office know if someone in the home has a medical condition. Having that information in the system will allow dispatchers to alert first responders of those medical conditions before they arrive, said Permit Technician Ruth Preston.
Preston added that she is working with electricity providers to ensure that an address is clearly marked before service is connected for new accounts, just like with water and sewer services.
To clearly mark an address, Preston suggested purchasing a large double sided sign that can be installed on the front of a mailbox post. The double sided sign comes with large reflective numerals, making it easy for first responders to read no matter the direction on the road they are traveling.
Also, if a resident’s mailbox is located with a number of others in close proximity, Preston said that it’s a good idea to clearly mark each individual home’s address at the beginning of their driveway.
Private roads are maintained by the property owner, meaning it’s their responsibility to ensure a street sign is installed at the intersection with county roads so first responders can find the home.
Nelson said the county’s ordinance states that a $50 fine can be issued when a home or private street does not have the proper identifying information.
If a resident has a Post Office box, they are still responsible for ensuring their address or long driveway is clearly marked.
Some residents may be homebound for one reason or another. For those residents, it’s a good idea to install a key lock box in a location that emergency responders can locate it. Nelson said she has a number of lock boxes that were donated by the Juniorette Diamonds. Those lock boxes can be obtained for free for qualifying homes, or purchased for $20 for all other homes. The resident would then provide her office with the code to the box, which is provided to the responding officer via a phone call from dispatch.
A new system is being installed as part of the county’s effort to consolidate dispatch services. Currently the city of Picayune has a separate system from the city of Poplarville and the Pearl River County Sheriff’s Department for that purpose.
Carey Meitzler, who is contracted with the county to provide IT services, said that a Rapid SOS system will be tied into the centralized dispatch when it’s established later this year. It currently allows dispatchers to see where a cellphone call is being made within 100 feet. In the future he expects that system to be updated to also show that caller’s elevation if they are inside a multistory building.
The centralized dispatch will also include consolidation of all county records so that a responding officer will know if a resident at an emergency call may have a warrant out for their arrest.