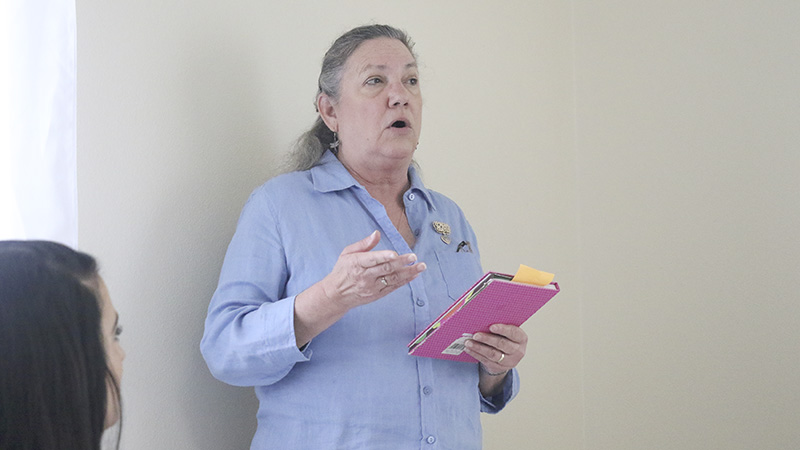 COMMUNITY SPIRIT: Sharron Bonnecarre, director of Crossroads Food Pantry, speaks to members of Exchange Club of Picayune about the impact a recent food drive held at Pearl River Central Elementary had on the community. Photo by Jeremy Pittari

Crossroads Food Pantry recently received a large donation of food from students attending Pearl River Central Elementary in a food drive organized by members of the Exchange Club of Picayune.
Sharron Bonnecarre, director of the faith-based food pantry, said the food drive brought in about 5,700 food items, including cans and boxed food.
“I have never seen that kind of giving in my life,” Bonnecarre said.
Students attending all grade levels at the school, K-5, were tasked with bringing in the most donations during the last two weeks of January in exchange for a pizza party funded by the Exchange Club of Picayune.
One class within each grade level was chosen as the winner based on the number of donations received. In all, close to 50 pizzas were brought to the school on Valentine’s Day by members of the local Exchange Club for the pizza parties.
Bonnecarre spoke at Wednesday’s Exchange Club meeting to share the impact of those donations. She said she recently held a distribution day, and even though she and her staff doubled up on food put in each bag, she still has food left from the elementary students’ efforts. She estimates that 70 households benefitted from the food drive, equating to more than 350 people being fed within the Crossroads area.
Crossroads Food Pantry is a faith-based operation that not only assists families in need with procuring food, but also helps families and senior citizens have a merry Christmas. Since the food pantry is faith-based, federal funding is not an option for Crossroads, Bonnecarre said. All efforts by the organization are funded through community donations, grants and the work of Feeding the Gulf Coast.
Every two weeks volunteers with the organization also bring meals to about 15 shut ins in the county.