Volunteers help out at Arboretum 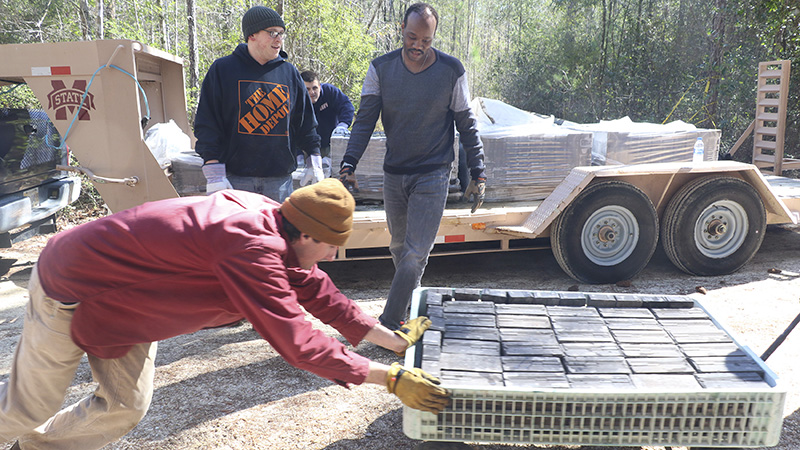 GOOD DEED: Seven volunteers helped staff at the Crosby Arboretum last week with unloading these bricks, which will be used to build a path that will lead up to a planned bridge in the Gumpond Exhibit. Construction of the bridge will utilize about 16 telephone poles. Photo by Jeremy Pittari

Last week, Naval oceanographers, meteorologists and a civilian volunteered their time to help the Crosby Arboretum with a bridge project.
First Class Petty Officer Jonathan Salgado with Naval Oceanography at Stennis Space Center, said he and six other volunteers helped Arboretum Grounds and Maintenance Director Terry Johnson with preparing for the construction of a bridge set in the spring.
Their task was to unload bricks and stage them in a key area of the Arboretum. The bricks will be used to create a path leading up to the bridge, Salgado said.
The effort was part of the enlisted men and woman’s community relations work. Salgado said that he and his fellow volunteers typically live in an area for about three years at a time. In that span, they come to think of those areas as home and like to give back to those communities while they are there.
Johnson said the bridge will be built using 16 creosote poles on the north end of the Arboretum near the Gumpond exhibit. Arboretum Director Pat Drackett said the bridge was designed during a course conducted by Hans Herrmann, professor of architecture at MSU.
A date to build the bridge has not been set yet.