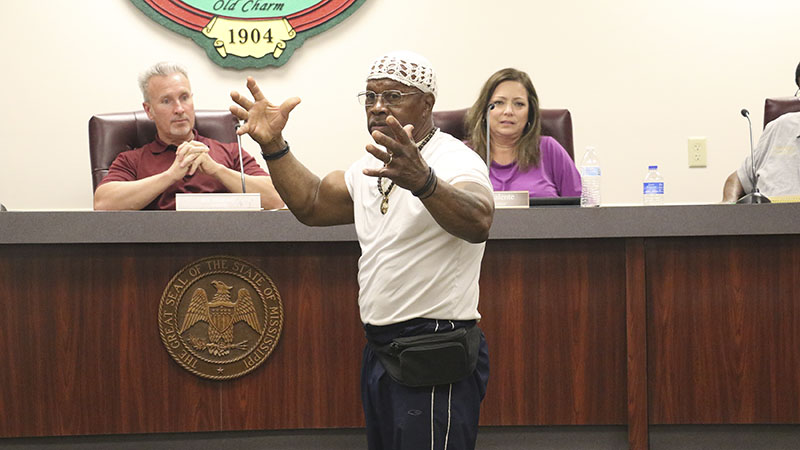 COUNCIL DIVIDED: Picayune resident Charlie Johns attributes the removal of Rev. Edward Stubbs from the Picayune School District’s Board of Trustees as being similar to having a rope being put around his neck during Tuesday’s City Council meeting. Photo by Jeremy Pittari

A divisive matter controlled most of the Picayune City Council’s meeting Tuesday, which focused on the appointment of a member to Picayune School District’s Board of Trustees.
The matter at hand concerned the reappointment of long time Board of Trustees member Rev. Edward Stubbs, who was the only black member of that Board. When the matter came up for a vote, Councilor Larry Breland took the offensive, vaguely alleging that Stubbs would be voted down, and another person nominated to take his place.
After stating that the Board needed to retain what little minority representation was currently in place, he accused one or more of the rest of the Council of trying to appoint another member, but no such motion had been made at that point.
The matter became clearer when the Item asked if Breland expected another person to be nominated, to which Breland referred the Item to Mayor Ed Pinero. Pinero confirmed that a resume for another candidate had been submitted, later determined to be Jarell Myers.
Discussion of the matter capitalized on more than 40 minutes of Tuesday’s meeting where Breland accused the other Councilors of creating division in the city. He then called several community members to make comments as to why the Council should keep Stubbs, including Rev. Brian Dees, Charlie Johns, and Rev. Joey Mark. All three spoke highly of Stubbs and gave reasons as to why he should remain on the Board.
Mark accused the Council to be engaging in unethical practices.
“It’s the Good Ole Boy system in Picayune…,” Mark said, which resulted in applause from much of the audience in attendance, which was standing room only.
Johns described the actions of the Council to that of having a rope being put around his neck.
In the end, the Council voted 3-3 on the matter, meaning the matter failed. Pinero, Breland and Councilor Lynn Bogan Bumpers voted to keep Stubbs on the Board. Councilors Tammy Valente, Wayne Gouguet and Janice Miller Stevens voted against Stubbs’ reappointment.
After the vote, Breland continued to voice his opposition on how the matter ended.
When it was time for the second nomination, Gouguet nominated Myers. It was that point that Breland and Dees accused the Council of having prior knowledge of an attempt to replace Stubbs. Dees even approached the Council to ask who put Myers up for consideration. For a time no one spoke up, but after Dees accused Gouguet by name of being behind Myers’ nomination, Gouguet admitted he saw Myers’ resume and felt he would be a good addition to the School Board.
Valente said she approved of Meyers’ nomination since she is familiar with him and his reputation in the community.
As she attempted to give her side, members of the audience continued to interrupt her with cries of objection. Several times during the discussion, cries of “order, order!” could be heard from law enforcement officers in attendance.
In spite of the discussion moving to Myers’ appointemt, Breland continued his objection to the removal of Stubbs.
“You hit me upside the head and it hurts and you tell me I’m out of order,” Breland said.
As the Council moved to vote on the appointment of Myers, Dees pleaded to Pinero to table the matter. Pinero said that by law he can not make a motion and that a motion was already on the table. To table the matter, both Stevens and Gouguet would have had to rescind their second and motion respectively, to which both declined.
When it came to a vote, Gouguet, Bumpers, Pinero, Valente and Stevens voted for Myers’ appointment to the Board. Breland voted against that appointment.