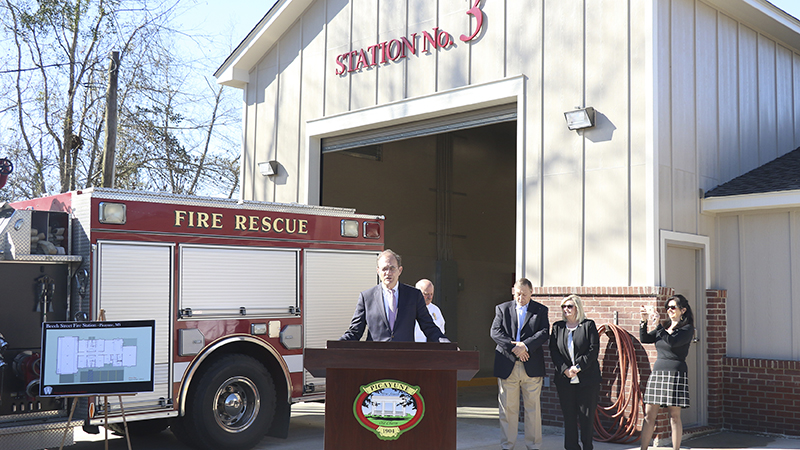 A ribbon cutting ceremony held Monday morning gave the community a chance to tour the city of Picayune’s newest fire station, located at the end of Goodyear Boulevard.
During the ceremony, City Manager Jim Luke said that Fire Station 3 was built in the best possible place thanks to efforts from State Senator Angela Hill, then Secretary of State Delbert Hosemann and Representative Stacey Wilkes.
Hill said that when she was approached by Fire Chief Keith Brown about obtaining ownership of the lot at the end of Goodyear Boulevard to build a new fire station, she quickly got in touch with Hosemann to see about having ownership of the lot, which was owned by the state at the time due to tax forfeiture, turned over to the city.
Hosemann said that when Hill approached him with the request, he got right on it.
Hosemann, who just recently took office as Lt. Governer of Mississippi, said that fire firefighters are important to a community because they do more than just respond to fires. From providing medical attention and working accidents, firefighters across the state save lives in a variety of ways.
Not only will the new station put firefighters in a key area of the city, Hosemann said that having good fire departments is just as important as any other part of a city’s infrastructure when building economic development.
Brown said the work to reach Monday’s ribbon cutting took at least four years. The first draft of the building now located at the end of the Boulevard was created in 2015.
“It’s been a long road to get here,” Brown said.
Construction of the station is expected to come at no cost to the city. Brown said that City Clerk Amber Hinton was able to find a way to use fire insurance rebate funds to retire that debt.
The 2,800 square foot station features a truck bay for a fire engine, three bedrooms for firefighters, a kitchen, a living room and an office that could later be used as a fourth bedroom as the department’s staff increases, according to previous coverage.
This new station was needed due to the state of the previous location, situated on Palestine Road next door to the Pearl River County SPCA. PRC SPCA Vice President and Shelter Director Judy Wheaton said the local shelter may be able to put the old facility to use if the Picayune School Board approves a request to do so. Wheatson said the plan is to use that facility as storage, a clinic for shelter pet care or even as a place where residents can go to see adoptable pets.