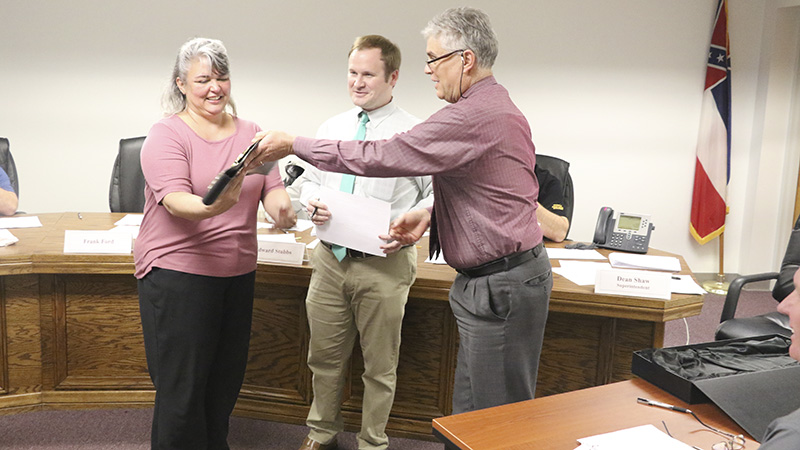 ATTENDANCE BELT: From left, West Side Principal Kerri Wilder accepts the attendance belt from Superintendent Dean Shaw for having the highest student attendance rate of 95.55 percent during the month of January. They are joined by Curriculum Director Brannon Johnson, center. Photo by Jeremy Pittari

Picayune School District’s Board of Trustees heard about efforts to increase ACT scores and approved a policy to help reduce energy costs.
Picayune Memorial High School Counselor Toni Tucci said that efforts are underway to ensure ACT scores in the District are on the rise. While she won’t know if those efforts have been successful since testing isn’t set to take place until March, those students who took the test late in 2019 have received their scores.
Of those 102 students who took the test in December of 2019, 20 took the test previously. The average composite score for those who took the test previously was 24.70, leading to an average growth of 3.1 points. Juniors who tested for the first time had an average composite score of 20.43.
In an effort to bring scores up, Tucci said that students have been focusing on each category featured in the ACT six weeks at a time. She said she is excited to see how the scores come back after testing is held in March.
The Board approved a motion to employ a policy to help reduce the District’s energy bills. In that policy, staff will be asked to turn lights off in rooms that are not in use, turn off displays to computers daily and turn off the computer itself at the end of each week. While mini refrigerators up to 3.6 cubic feet are allowed in classrooms, staff are asked to unplug them during holidays and take them home over the summer. The presence of other small appliances in classrooms will require administrative approval.
HVAC systems should be turned off at the end of each day, with the exception of those in kitchens, dining areas, science labs, nurse offices and computer labs, where room specific temperatures are to be employed.
During Tuesday’s meeting, the Board also presented West Side Elementary with the attendance belt for having an average attendance of 95.55 percent for the month of January.
The next Board meeting will be March 10 at 5:30 p.m.