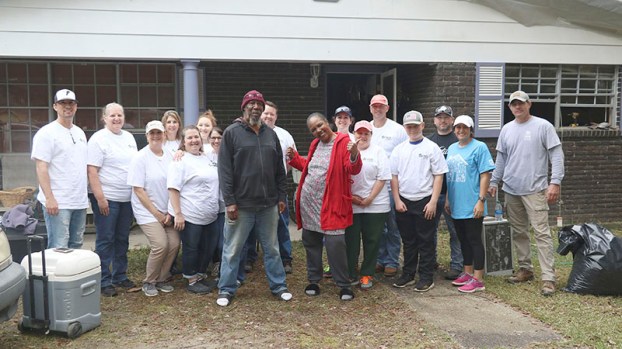 More than a dozen volunteers gathered at the home of Billy Williams, pictured in the bottom photo at center left, and Laronda Washington, center right, to help begin repairs to their home caused by a leaking roof. Photo by Jeremy Pittari 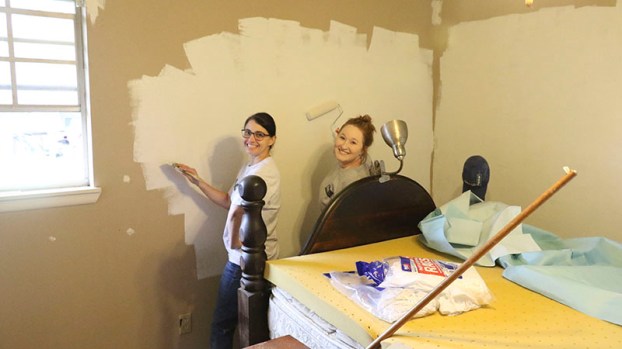 Volunteers also helped with painting walls in a couple of bedrooms. Photo by Jeremy Pittari

On their President’s Day holiday, more than a dozen volunteers helped a couple of Picayune residents make some repairs around the house under the umbrella of Habitat for Humanity Bay Waveland.
The local chapter of Habitat became involved after Bank Plus employee Jason Bounds informed Habitat for Humanity Program Director for Pearl River County Courtney Knight of a need of one of his customers. Bounds said he heard about the leaking roof on the Ponderosa home of Laronda Washington and Billy Williams one day while they were in the bank. Bounds said he tried to enlist the help of local contractors, but it wasn’t until he informed Knight of the need that action was taken.
Monday, more than a dozen employees of Bank Plus and other volunteers gathered at Washington and Williams’ home to begin the process of repairing the leaky roof. The volunteers removed sheetrock and insulation from the ceiling under the leaking roof and put up a tarp until roofers can arrive later this week to perform permanent repairs. Knight said the work will include installation of an entire new roof, including the rafters.
Volunteers also helped paint a couple of rooms in the home on Monday.
Knight said roofers will be at the home to replace damaged wood and repair the roof on Friday, and should be done by the following Monday.
Bounds said once the roof is repaired, new sheetrock and flooring will be installed in the affected rooms.
Washington and Williams said they have been dealing with the leaking roof for two to three years.
“We’re on a fixed income. I tried to do it myself, but it was just too much for me,” Williams said.
They both said that Habitat for Humanity Bay Waveland funding the roof replacement and the volunteers putting in efforts to make their home temporarily water tight on Monday were “awesome.”