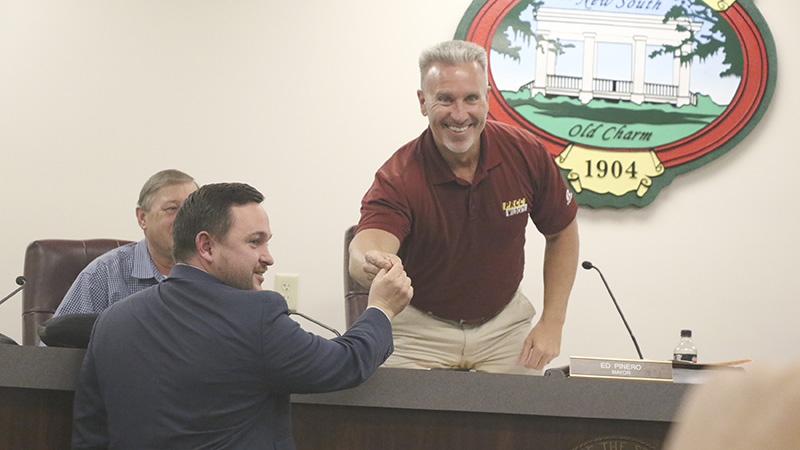 WELCOMING GESTURE: Mayor Ed Pinero, at right, hands Blaine LaFontaine, the county’s new Economic Development Director, the “key to the city,” which was actually a key to LaFontain’e office at the Pearl River Community College. Photo by Jeremy Pittari

During Tuesday’s meeting of the Picayune City Council, discussions were held about the establishment of a certified running track in the city and ongoing upgrades to the loading platform for Amtrak services to make the area ADA complaint.
Now that the city has a certified track, events that feature a 5K or one mile race can now be used to break records and qualify for races held elsewhere, said Todd Rayburn.
The effort was made to establish the official course after Rayburn and others noticed a number of Picayune residents participating in official races in Hattiesburg. He said that now that there’s a certified course in town, races held on that course will be expected to pull in more participants, and in turn bring in more tax dollars. Rayburn said the course was laid out in such a way that only one police officer would be needed to work it for safety. The first run that is scheduled to utilize that route will take place during the spring Street Festival on April 4.
Work to make the loading platform for Amtrak passenger services is underway, said Code Enforcement Officer Tom Milar. Grant funding is paying for the construction of the 400 foot platform and a wheel chair lift. The rear porch on Picayune’s Intermodal Tourism Center will be removed as part of the project, but will be rebuilt using a polymer based material that will resist rot. Additionally, 14 lights will be installed in that area, and a roof will be built over the platform.
Memorial bricks currently in that area will be removed and relocated to the outside of foot traffic. The project is planned to take a year, but could be complete in nine months weather permitting, Milar said.
Work to establish devices to deter speeding in the Berrywood subdivision is continuing. Councilor Tammy Valente said she assisted one of the residents in collecting signatures to authorize the city to install a speed bump or similar feature. Public Works Director Eric Morris said that according to his research a speed hump would be better in that area rather than a speed bump. The difference between the two is that a speed hump has a lower profile and runs the entire width of a street.
Valente said that 35 residents in that area have agreed to the installation of a speed control device, with only one was opposed.