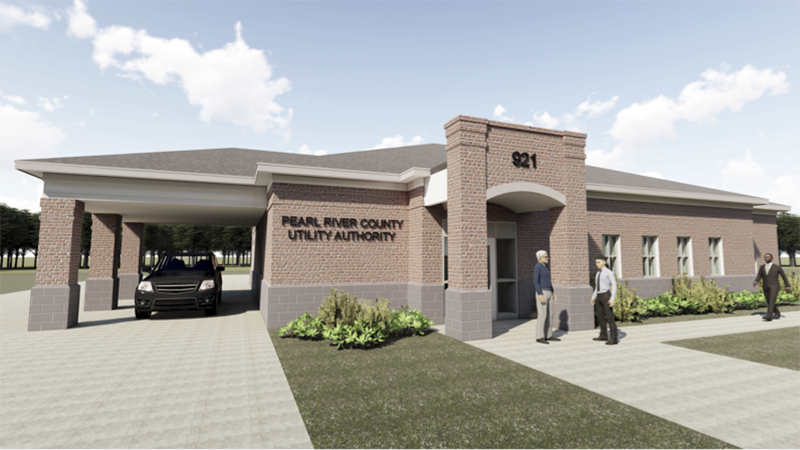 COMING SOON: This render of the Pearl River County Utility Authority’s planned administrative office and bill collection site depicts how the building will look, which is slated for construction along Goodyear Boulevard in Picayune. Submitted image

Bids for the construction of a new administrative office building for the Pearl River County Utility Authority have been received, but the lowest bid will not be awarded until a method to pay for the construction is found.
Executive Director Cliff Diamond said bids for the 3,600 square foot facility were received from 10 companies and opened on Feb.11. The lowest bid came in at $775,000, but was not awarded yet because the Board of Directors is still looking at financing options based on revenue bonds, Diamond said.
According to previous coverage, the estimate to construct the building was between $475,000 and $575,000.
“The bid came in a little higher than expected but that appears to be the going rate,” Diamond said.
He expects the bid to be awarded soon, and construction to begin in early May with an anticipated completion date of sometime in November.
Diamond said a new facility is needed because the current office, located in Picayune’s Industrial Park, is not ADA complaint. Additionally, rent for that space over past 10 years has totaled close to $300,000.
The new facility will not only be ADA compliant, but also feature a drive through window so the nearly 700 customers who live outside a municipality can pay their bill easier. Residents who live in Picayune or Poplarville are billed through their respective municipality, who turns over money collected for sewage services to the Utility Authority. Each municipality operates their own water system.
The lot for the new building has been procured, located at 921 Goodyear Boulevard, which is between Chimney Square and the Picayune offices of Dungan Engineering.
The new facility will also feature a conference room for training sessions, Board room for the Board of Directors to hold public meetings and plenty of parking. Currently the Board of Directors meets in a conference room at the wastewater treatment facility on Neal Road in Picayune.
Design of the new building will allow for expansion on the west end as the needs of the Utility Authority grow.
In other Utility Authority news, the Utility Authority received the final pay application for the second phase of a city wide wastewater rehabilitation project in the city of Picayune. Diamond said the $6 million project went further than expected due to less point repairs being needed than previously anticipated.
In addition to point repairs, which entails digging up a section of line to conduct major renovation work, the project included installation of a special lining on existing pipes to add about 50 years of lifespan.
The under run allowed the Utility Authority to pay for the lining of more wastewater lines than planned.
Another project that came to a close recently involved the installation of a wastewater collection system in the Eagle Heights subdivision, Diamond said.
Additionally, the Board of Directors recently passed a motion to reduce septage disposal fees from 20 cents per gallon to about 9 cents per gallon. That change was made to make the Utility Authority’s septage treatment system competitive in the current market, Diamond said.