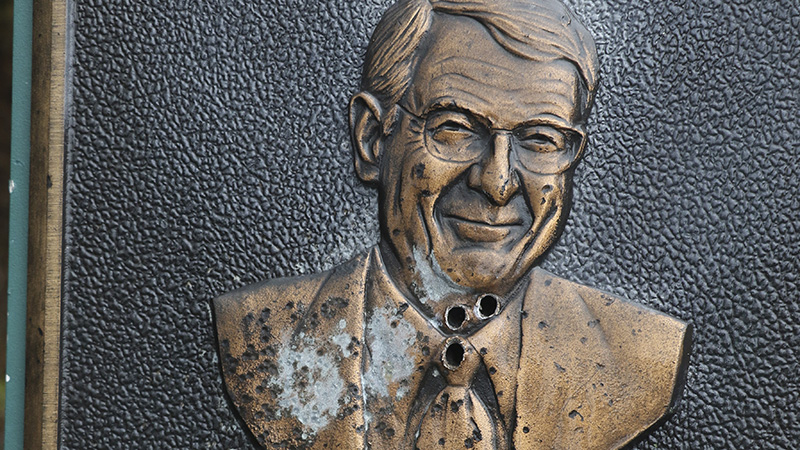 VANDALIZED: This commemorative plaque for Daniel Tabberer at a boat launch in Pearl River County has been shot several times. Photo by Jeremy Pittari

A boat launch built along the West Hobolochitto Creek in memory of the first refuge manager of the Bogue Chitto National Wildlife Refuge has allegedly turned into a venue for vandalism and other unsavory activity.
Community members have taken note and enlisted the help of local volunteer organization Friends of Boley to make the public boat launch a place where families can enjoy a day in the outdoors.
The launch was dedicated to the memory of Daniel Keith Tarbberer in July of 2007.
It’s a simple facility, made up of limestone drive, a concrete launch and signs denoting how and why it came to be. It serves as a place where Pearl River County residents can launch a small boat or canoe and enjoy a day of fishing or just a trip up and down the Hobolochitto Creek.
But Friends of Boley member Derek Turnage has noticed that it’s become a place where people dump trash, discard burned vehicles and a place where people apparently conduct target practice using those signs.
Turnage said part of the problem is the rural nature of the launch and its vegetation cover makes it an ideal place to dump things or conduct other potentially illegal acts. He’s heard allegations that drug deals may be conducted there and neighbors have complained that gun shots can be heard in the area.
A visit to the site shows evidence that one or more people have been shooting at the various signs in the area, including a sign depicting the likeness of Tabberer that now has several bullet holes.
“People are not taking care of it,” Turnage said.
In response to the activity at the site, Pine Grove Volunteer Fire Department Chief Steve Seal has been working with District IV Supervisor Farron Moeller to obtain permission from the U.S. Fish and Wildlife Services to clean the area up and make it more visible from the road. Seal said the plan is to clear the underbrush as much as possible and remove any trees that don’t provide sustenance to the wildlife. That memorandum of understanding was recently granted, and now the task will be to raise funds to conduct the cleanup work. Any vegetation removed from the area will be mulched and added back to the site.
One of the long term goals is to add lighting to the boat launch so law enforcement can more easily patrol the area. However, that will require funding to not only install the light, but pay the bill.
Seal added that one of the signs installed by the U.S. Fish and Wildlife Service had to be removed due to the vandalism, which he expects will be replaced by that agency. As for the other signs still at the site that display damage from gunfire, Seal would like to replace them as well with some help from the public.
Anyone interested in becoming involved in this project can visit the Friends of Boley Facebook page to get in touch with a representative.