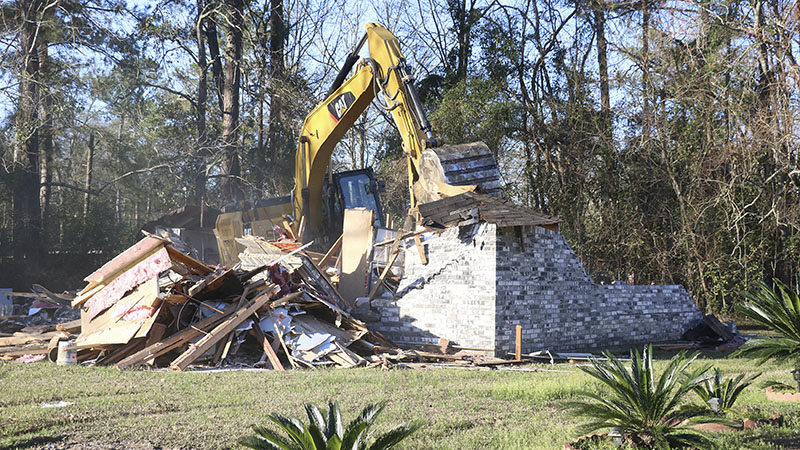 DOWN IN MINUTES: This house on Fern Drive in Picayune was torn down by city employees after it was determined to be hazard due to rotting infrastructure. Photo by Jeremy Pittari

A home that suffered roof damage during Hurricane Katrina was torn down on Friday because it was rotting from the inside.
City of Picayune Code Enforcement Officer Tom Milar said he was informed of the state of the home, located at 1220 Fern Dr., after receiving a complaint from a neighbor.
Milar said that during his inspection of the home he determined that the resident was living in the kitchen, because holes in the roof prevented her from using the rest of the structure.
His inspection also determined that the rafters in the roof had rotted so bad that the only thing keeping the home standing was the brick walls.
According to his research, he determined that the home suffered roof damage after Hurricane Katrina, and the only effort to repair the problem was to install a blue tarp that had since rotted away.
Demolition of the home took less than 10 minutes with the use of a skilled trackhoe operator. Public Works Director Eric Morris said that any metal that could be scrapped from the demolition of the home will be sold to help defer the lien that will be added to the owner’s property taxes.
Four more demolitions are planned within the city, which will take place in the next few weeks, Milar said.