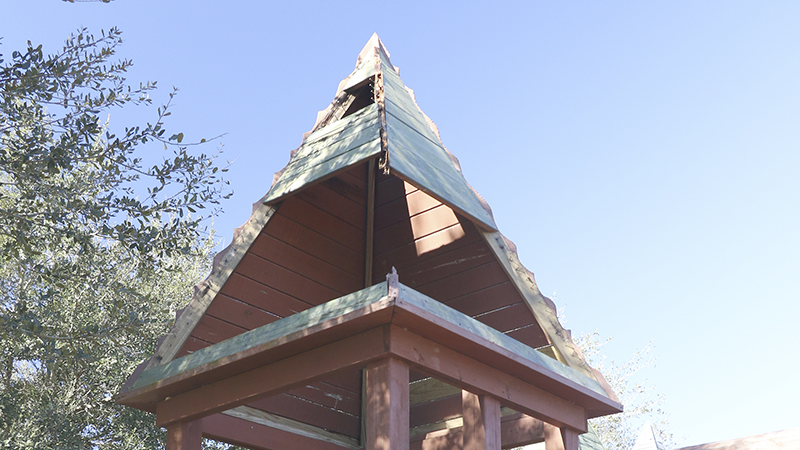 FALLING DOWN: This canopy over a portion of Kids Kingdom at Picayune’s Friendship Park has rotten away and left this area of the structure exposed. Photo by Jeremy Pittari

During Tuesday’s meeting of the Picayune City Council, the need for park improvements was discussed.
The matter came up during the agenda item listed as “Consider request for permission to explore, investigate, and design a plan for upgrades to Friendship Park.”
The wording in the the agenda item led to Councilor Larry Breland requesting the motion be amended to include all parks within the city, not just Friendship Park. However, since Tuesday’s meeting was considered a recessed meeting, City Attorney Nathan Farmer said the motion could not be amended.
Mayor Ed Pinero suggested tabling the matter until the first meeting of February so the motion could be changed to include all parks.
Even though the Council eventually tabled the matter, they allowed Adam to give the presentation he put together regarding necessary park upgrades or repairs.
He said that the issues at Friendship Park include accessibility for those with disabilities, drainage issues at several baseball/softball fields at Friendship park and the need for more bathrooms.
He added that the gazebo next to Kids Kingdom recently had to be torn down due to safety issues, and the mostly wooden Kids Kingdom also needs repairs due to issues with rot.
During tournaments held at Friendship Park, the limited restrooms lead to long lines, so additional facilities are needed.
Adam did note some plans for other parks in the city, such as the intention to install solar lighting at the basketball courts at J.P Johnson and Leola Jordan parks.
Some of the improvements proposed at Friendship Park could pay for themselves in a only a few years, such as Adam’s suggestion that the ball fields at Friendship Park be converted to synthetic turf, which would draw in more teams during tournaments, leading to additional sales tax revenue.
Councilor Lynn Bogan Bumpers said she would like to see updates be made to baseball fields within her district so the community there can play games on Sundays.
Councilor Tammy Valente asked if the city has considered applying for grant funding from the recent BP settlement to help pay for these improvements. Adam said he intends to apply, and is aware of programs at the University of Southern Mississippi that will assist with the application process.
The next Council meeting will be Feb. 4, at 5 p.m.