Council to apply for funds to purchase turnout gear for firefighters 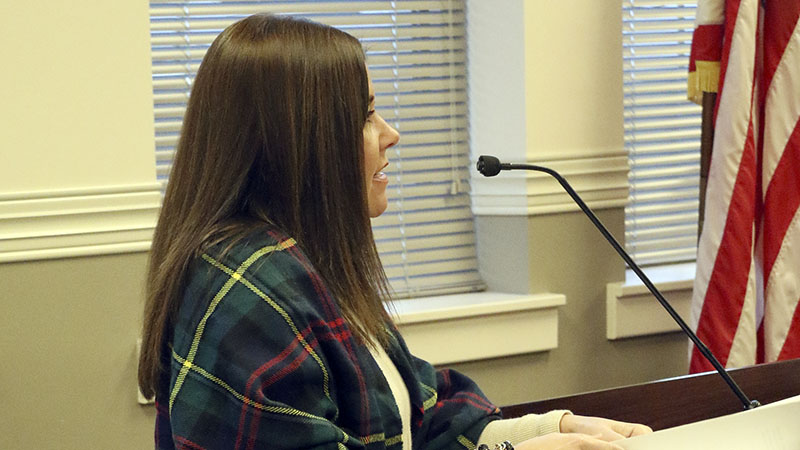 SAFE GEAR: City of Picayune Grants Administrator Christy Goss addresses the City Council about her intention to apply for grant funding from the Lower Pearl River Valley Foundation so all firefighters will have up to date turnout gear, which is used when the emergency responders fight fires. Photo by Jeremy Pittari

The need to apply for grant funding to purchase new firefighter turnout gear, advertising for a new lawn maintenance contract and the installation of speed bumps in a neighborhood were discussed during Tuesday’s Picayune City Council meeting.
Grants Administrator Christy Goss said her request to apply to the Lower Pearl River Valley Foundation for the grant was sparked by the need of 15 new sets of turnout gear for firefighters within the city.
If approved, the grant would provide up to $30,000 that would be combined with a 20 or 25 percent match in funding from the city. The city’s portion would be between $6,500 to $7,000.
Picayune Fire Department Deputy Chief Barry Lee said turnout gear for firefighters typically lasts 10 years, unless it becomes torn or burned.
Only the oldest or most damaged gear would be replaced. Lee said if the grant is approved, all personnel in the Fire Department would have up to date gear.
Last year the city tried a pilot program of having an outside company help with lawn care within the city, specifically at the parks. Public Works Director Eric Morris said the idea was to free up city employees so they could focus on keeping grass at the entrances to the city maintained. By using an outside company, the city saved money compared to hiring additional personnel.
Since the pilot program was successful, Morris proposed advertising for a three year contract for the same service, but also adding cemeteries. The Council approved a motion to advertise for those services.
At the end of Tuesday’s meeting, residents in the Berrywood subdivision requested the installation of speed bumps to deter a long standing speeding problem the residents have faced. Mayor Ed Pinero said the first step in installing a speed bump is to have representatives with the Police Department conduct a study and provide that information to Public Works.
Pinero also said that since there is not a current homeowners association representing that subdivision, all residents in the area would need to be polled before the speed bump would be installed.
For more on Tuesday’s meeting, see Thursday’s Item.