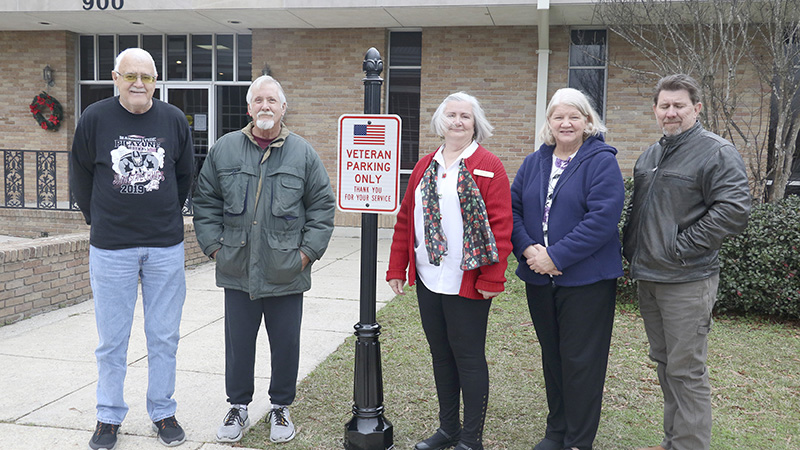 Six new designated parking signs have been installed in various parts of Picayune in an effort to reserve those spaces for veterans.
Public Works Director Eric Morris said that by Friday the signs will have been placed at the Margaret Reed Crosby Memorial Library, Crosby Commons, City Hall, the Intermodal Tourism Center, the Municipal Airport and Picayune Police Department.
All told, the signs cost the city about $500, Morris said.
The idea to install the signs in the city was proposed by Donna Spiers, an employee of the Pearl River County Library System, after she saw them in other cities. Morris said that since Spiers made the request, the sign at the library on Goodyear Boulevard was installed first.
Pearl River County Library System Director Carol Phares said she is proud that a sign was installed at the Picayune location of the library because her husband is a veteran.
“It’s humbling as a veteran to see the city moving forward with this,” said Ronnie Stogner, the commander of VFW Post 3804 in Picayune.
As a veteran of the Vietnam War, Stogner said he and other veterans did not receive a warm welcome when they returned to the United States from that conflict.
“You didn’t want to wear a uniform back then,” Stogner said.
Stogner said it’s pleasing to see veterans receiving the respect they deserve.
Ronnie Lowe, who is also a member of the local VFW Post, said the signs will be beneficial, especially to the veterans who are senior citizens.
Morris said he expects the Picayune Police Department will do its best to ensure that veterans are the ones to benefit from the placement of the signs and cite instances of improper use of the parking places.