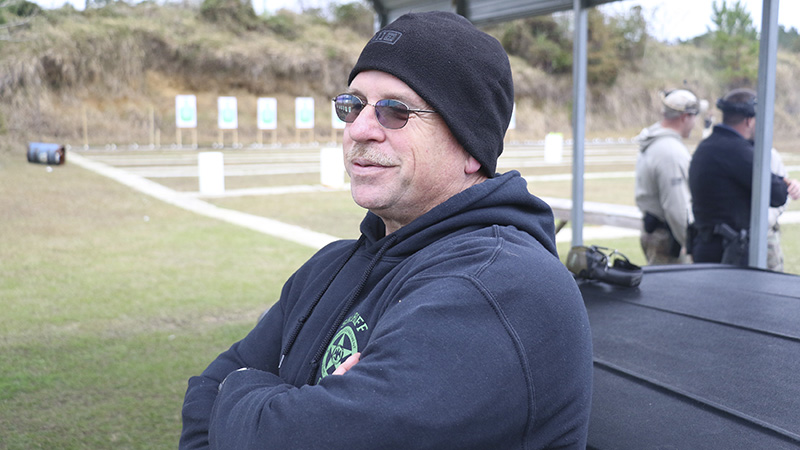 For about 27 years, Shane Tucker has devoted his professional life to law enforcement. Friday, he retired from the position of chief deputy for the Pearl River County Sheriff’s Department and will start a new chapter in his life.
Tucker has served the community as the Chief Deputy of the Pearl River County Sheriff Department for the past 11 years.
At first he didn’t think he would be in law enforcement because his father was a police officer in Los Angeles, California for 30 years.
Prior to starting a career in law enforcement, Tucker joined the Army 83nd Airborne and served in that capacity from 1982 to 1986.
In 1992, he joined the Forrest County Sheriff’s Department in corrections.
While working in corrections, he overheard the interesting stories officers shared as they brought suspects into the jail. Inspired by those stories, he heard that the Hattiesburg Police Department was about to hold a police academy, so he applied and was accepted.
He continued to work in Hattiesburg until he got a job as an investigator with the 15th District Attorney’s office in 2006, when Claiborne “Buddy” McDonald was at the helm.
Then in 2007, David Allison was elected Sheriff of Pearl River County and Tucker was asked to join the ranks as the chief investigator. Nine months later, Tucker was named the chief deputy. During his time in law enforcement, Tucker said he has enjoyed the camaraderie, much like what he experienced during his time in the armed forces.
“Deep friendships develop, (there’s) a lot of trust,” Tucker said.
One thing he has learned in his time in Pearl River County is that deputies here have to know how to diffuse a situation and effectively talk people down because the closest backup while on a call could be 20 or 25 minutes away due to the rural nature of working for a sheriff’s department.
Now that he has retired, Tucker said his long term goal is to purchase a motor home so he and his wife can travel. But at some point after the first of the year, Tucker said he expects to look for part time work.
“It has been a pleasure serving the citizens here and working with the fine people at this department,” Tucker said.