Signs installed throughout city to remind drivers to share the road 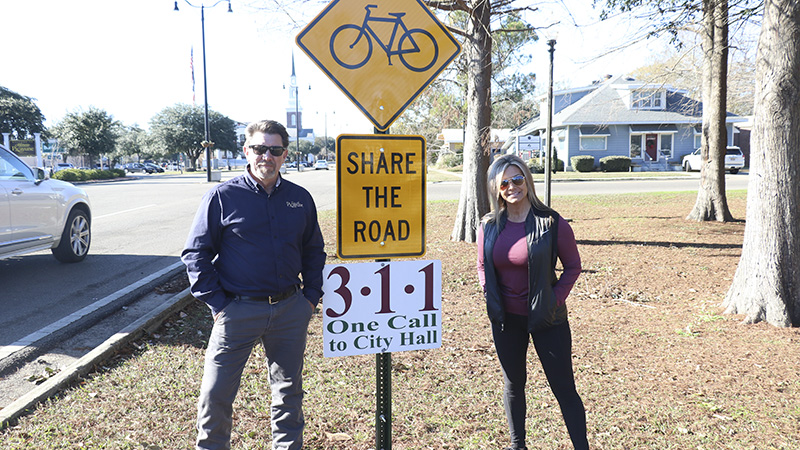 RULES OF THE ROAD: Across the city of Picayune 18 signs like the one pictured have been installed to remind motorists that bicyclists have access to public roadways as well. From left are Public Works Director Eric Morris and Tonya Dawsey. Photo by Jeremy Pittari

Across the city of Picayune, 18 new signs have been installed to remind motorists that they are required by law to share the road with bicyclists.
Local business owner Tonya Dawsey said she made the request for the signs to two entities, the Mississippi Department of Transportation and the city of Picayune. MDOT will handle installation of the signs along state routes, while the public works department employees within Picayune have installed the signs along city streets.
Public Works Director Eric Morris said the signs have been installed on North and South Main Street, Martin Luther King Boulevard, Rosa Street, Highland Parkway, Cooper Road, Kirkwood Avenue, East and West Canal Street and North and South Blanks Avenue. Each setup cost the city about $100, for a total cost of about $1,800.
Signs have been installed along Highway 11 near the East Hobolochitto Bridge and further south on the same highway. Dawsey said that representatives with MDOT said they plan to install more along the highway once the widening work is complete.
Morris said he chose those areas because there are a number of people who have been seen riding bicycles in those areas, but that does not mean those were the only places where motorists need to watch for bicyclists.
Dawsey said she got the idea from seeing the signs in other towns where she and her husband ride bicycles for fun.
According to state law, motorists are required to provide at least three feet of space between their vehicle and a bicyclist and can only do so when it is safe.
If a vehicle is passing a bicycle traveling in the same lane as the motorist, the motorist must ensure it is safe before making a right hand turn, according to Mississippi code 63-3-1309.
Morris said the reason the signs along city streets are slightly smaller than the ones on the highway is because the size of the sign is determined by the speed limit along the road where it will be placed.
Signs like these are intended to reduce the number of incidents of collisions between vehicles and bicycles.
On Oct. 17 of this year, a 16-year-old bicyclist was hit by a man driving a vehicle on Sycamore Road in the Picayune area, said Maj Marc Ogden with the Pearl River County Sheriff’s Department.
The juvenile was transported to Highland Community Hospital by AAA Ambulance, before being flown to the University of Mississippi Medical Center ICU, Ogden said.
Early in December, officials with the department were notified that the 16-year-old had passed away, Ogden said.
The Department received the initial call of the collision at 7:07 p.m. on Oct. 17, said Ogden. Upon arrival, responding deputies spoke with the driver, 59-year-old Tony Moaton who is a Stone County resident, Ogden said.
The crash is still under investigation, which included blood being drawn from the driver for analysis by the Mississippi Crime Lab. Results from the blood test to determine if charges should be pressed against the driver are still pending, Ogden said.
Ogden declined to release the name of the deceased since he was younger than 18.