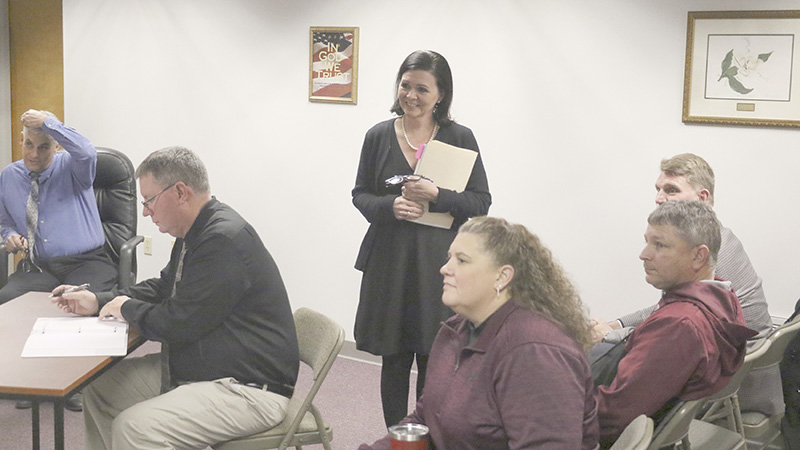 During Tuesday’s special called meeting of the Picayune School District’s Board of Trustees, its members were asked to switch insurance agents and some staff changes were announced.
At the end of the meeting, Superintendent Dean Shaw confirmed that some staff changes have occurred in relation to the passing of Assistant Superintendent Brent Harrell. To replace him, Athletic Director Walt Esslinger will assume those responsibilities. Picayune Memorial High School Co-Assistant Principal Kristi Mitchell is the new athletic director and will remain a co-assistant principal of the high school, Shaw said. Additionally, Head Football Coach Dodd Lee has submitted his notice to retire, but a replacement has not been determined, Shaw said.
At the beginning of the meeting, Beth Jarrell with Stewart Insurance Agency spoke to the Board about her concerns with the rising costs of workers compensation insurance for the District. She asked Greg Cullom, senior vice president of Hub International Gulf South, to speak to the Board about what he could do to help the District lower its insurance premium.
According to previous coverage, the District’s premium for workers compensation coverage has been on the rise due to a number of claims being filed. Cullom said that he can’t decrease the District’s quote for the coming year, but he vowed to work to do so in the long term. Even with Cullom’s help, he said it will be at least a three year process because a good year is rolling off the time frame used to establish a rate, and a bad year is rolling on. Jarrell said the quote for next year she was able to get based on last year’s audit is about $521,000.
During his pitch, Cullom said he can work with the District to identify areas where improvement can be made to reduce the number of claims and identify positions where a return to work program can be established. Such a program would try to find a place for a worker recovering from an injury by giving that person a job that is not too physically demanding such as hall monitor, with a physician’s blessing. Board President Frank Ford expressed concern with establishing a return to work program because the District had been previously advised against it. Finance Director Lisa Persick clarified by saying that when a position is federally funded, such as a teacher, the employee can’t become a hall monitor. Cullom said the ultimate goal is to reduce the District’s modifier by first focusing on lowering the instances and severity of claims.
The Board approved a motion to take the matter under advisement and then went into executive session to discuss a personnel matter.
The next regular meeting of the Board will be Jan. 14 at 5:30 p.m.