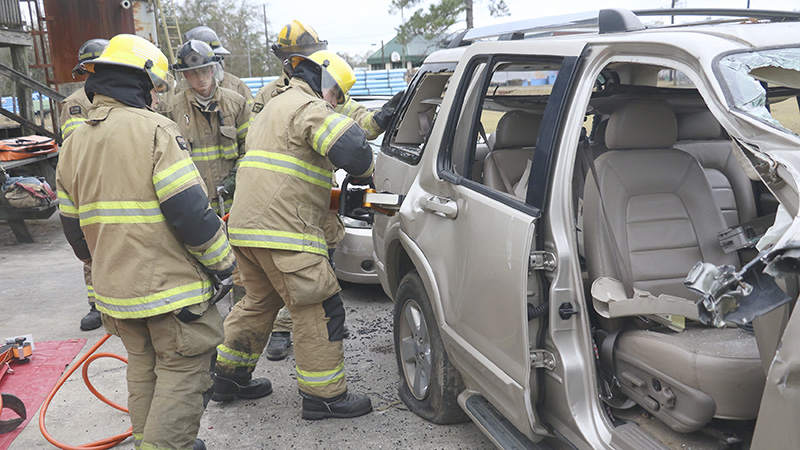 Newer members of the Picayune Fire Department got to test drive the department’s new extrication tools and received some training in the process, pictured at top. Photo by Jeremy Pittari

Firefighters with the Picayune Fire Department practiced their extrication skills with new gear recently purchased.
Assistant Fire Chief Barry Lee said the new gear means that all three rescue trucks in the fleet now have a set of extrication gear on board. This new set from Holmatro is also made of stronger material to help firefighters rescue people who are trapped inside newer vehicles made with stronger components.
For three days groups of less experienced firefighters within the department attended a two and a half hour session that included classroom instruction on how to use the new equipment, before setting them loose on one of three scrap vehicles donated by 4U2C Towing and Recovery to gain some hands-on experience. During the training sessions, the firefighters practiced spreading doors open, cutting them from the frame and cutting the roof from the vehicle.
Lee said that when the training is complete, the towing company owner will recover the vehicles from Fire Station 1 where the training was held.
The gear also comes with a set of stabilizers that will make rescuing people from overturned vehicles safer for the first responders. Previously, overturned vehicles were stabilized using whatever was at hand at an accident scene.
Some of the older extrication gear within the department is 15 to 18 years old, Lee said. Lee said the cost of the new equipment was about $19,000.