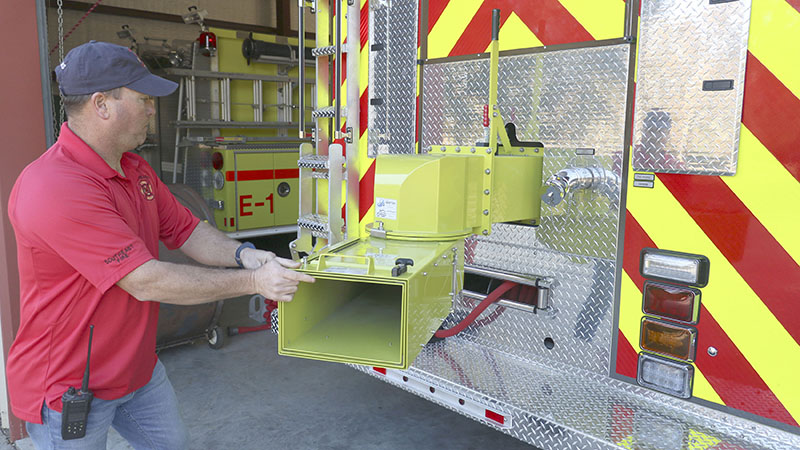 In just a couple of weeks, Pearl River County residents in the Southeast fire district will see a new lime green fire truck responding to calls.

The truck is capable of holding 2,000 gallons of water, and comes with a 3,000 dump tank that can be set up at any call so water will be available during the duration of the fire using the truck’s dump chute.

Scharenbroch said that the department sold two older trucks to North Central Volunteer Fire Department to help that department and to defer the $288,750 price tag from Deep South Truck & Equipment Sales in Seminary, Miss. They included a 1997 Ford E-1 pumper and a 1991 GMC tanker. Scharenbroch said the tanker was due for recertification when it was sold. The department also received a $70,000 grant. In all, the department was able to put a $105,000 down payment on the new truck. The rest of the expense will be covered with fire insurance rebates.

He chose that dealer because it’s located in Mississippi, provides full customization options and the truck was priced right for the options provided. In addition to the plethora of tools, ladders and hoses stored on the truck, it comes with several safety features such as a backup camera complete with microphone so the driver can hear what is going on behind the vehicle and sensors to avoid colliding with objects while in reverse.

Now, the class 7 department has a brand new truck complete with all of the storage space to carry $75,000 worth of new tools.

Scharenbroch said the department decided to make that additional investment to ensure the tools on the truck are in working order.

When the new truck officially goes online in the next couple of weeks, the current engine 1 at the F.Z Goss Road station will be moved to station 3 located on Mt. Carmel Road.  The department also has a station on Salem Road.

Scharenbroch said he is waiting on some additional equipment such as air packs to arrive before putting the new truck on the road.