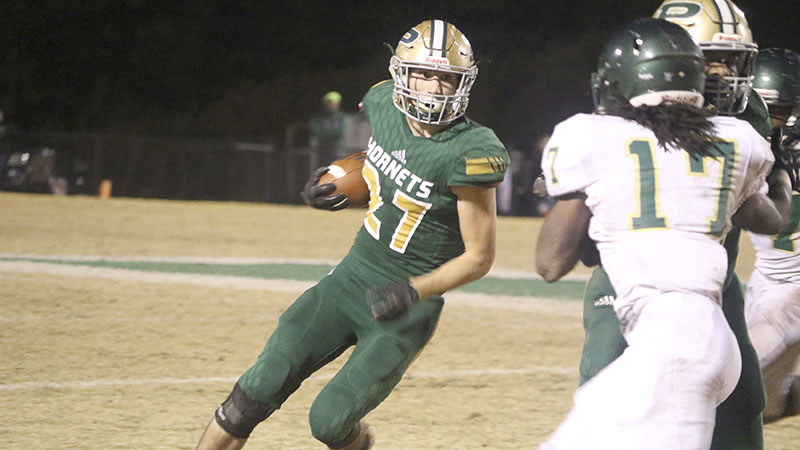 Ethan Taylor drives the ball down the field during Friday's win against South Pike. The win brings the Hornets into the next round of the 4A playoffs. Photo by Jeremy Pittari

What began as a close game between the Poplarville Hornets and South Pike’s Eagles resulted in Poplarville’s varsity football team earning the right to move on to the next round of the 4A playoffs.
The Eagles took the lead early after Poplarville turned its first possession over on downs. On the Eagle’s first play of a very short drive, Dontavious Turner completed a pass to Alex Adams from their own 20, who toted the ball the rest of the way for a touchdown with 9:28 in the first quarter. Turner’s attempt at a two point conversion run was unsuccessful, leaving the score at 6-0. It would be the only time the Eagles would hold the lead the rest of the night.
Both teams would show that they were evenly matched the remainder of that first half as both defenses stepped up to prevent further scoring until deep in the second quarter. With 4:11 left in the first half, the Hornets capped off a 10 play 76 yard drive that ended with Zac Owen reaching paydirt from the Eagles’ 2 yard line. Zach Carpenter’s PAT was dead on, bringing the Hornets into the lead 7-6.
That lead was widened with just 10 seconds left in the half when the Hornets used their final down to allow Carpenter to kick a successful field goal from the Eagles’ 20. The score was 10-6 going into halftime.

Coming back from halftime, the two teams traded turns scoring but the Hornets held the lead. After receiving the ball on downs, the Hornets drove the ball from their own 27 yard line through nine plays to bring the ball within the three yard line. The subsequent run by Owen and Carpenter’s PAT gave Poplarville a 17-6 lead with 4:57 left in the third quarter.

The Eagles tried to narrow the gap with a more than 50 yard run by Turner to the end zone from their own 43, but a penalty on their part brought the ball back. Turner would be unable to replicate that scoring play, turning the ball back over to the Hornets. But Poplarville was unable to score on their next possession.

Seven plays later the Eagles resumed possession of the ball, and scored two plays later when Turner ran the ball in for a touchdown from the Eagle’s 19 yard line. The clock had run out during the play, and Chris Royal was able to score two on a two point conversion, bringing the score to 17-14.

A facemask penalty against the Eagles on the ensuring kickoff put the Hornets at the Eagles’ 42. The Hornets drove the ball the rest of the way, at one point losing a third down due to an error on the part of the officiating staff. Again, Owen drove the ball from the three yard line to bring the score to 24-14 with Carpenter’s PAT and 5:19 to play.

The Eagles tried to close the gap again through a drive that started at their own 27. Through five plays, Turner was able to reach the end zone from the Hornets 23. Three attempts at a two point conversion due to penalties failed to help close that gap, leaving the score at 24-20 with 3:36 left in the game.

Poplarville sealed the win with an 80 yard drive through seven plays capped with a four yard touchdown run by Owen and Carpenter’s PAT.

“I’m so proud of this team, this is on of the biggest wins we’ve had in this program. I’m super fired up,” said Head Coach Jay Beech after the win.

According to an announcement made at the end of Friday’s game, Poplarville will play host to Lawrence County next week in the next round of the 4A playoffs. Kickoff will be at 7 p.m.