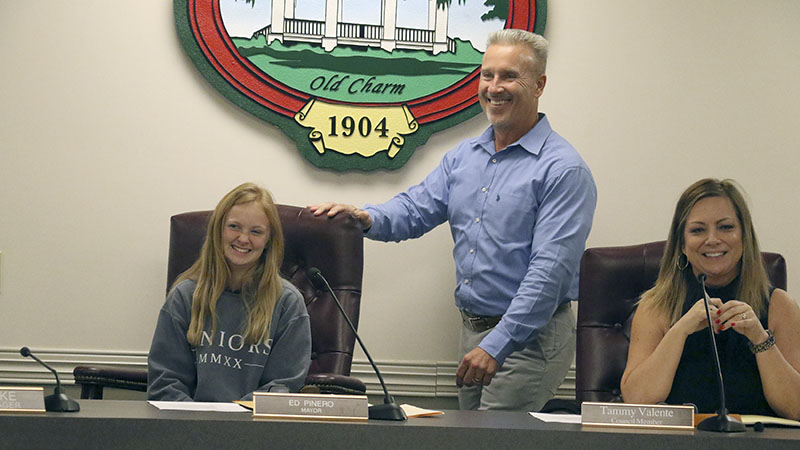 CLASS PROJECT: Macy Pigott, a student of Our Lady Academy, attended Tuesday’s meeting of the Picayune City Council Tuesday evening. During the meeting, Mayor Ed Pinero Jr. asked her to come to the front of room and have a seat in his chair. Photo by Jeremy Pittari

A donation of $40,000 from Picayune Main Street was accepted by Picayune’s City Council to be used to construct new parking along South Main Street.

Public Works Director Eric Morris said the project is slated to construct a series of parking spaces similar to those recently created along North Main Street.

He said the project is to start early next year, and is slated to include the same amount of parking spaces as the lot across from PJ’s Coffee.

Based on the cost to construct the parking lot across from PJ’s Coffee, Morris said the donation from Main Street should be enough to cover the cost of the project, provided the city can use public works employees to provide in kind services, such as removing the old curb and grade work. He valued that in kind work at about $20,000.

Additionally, Dungan Engineering has agreed to provide oversight work at no additional cost above the city’s monthly retainer fee.

Morris said the lot will be built in the area of South Main Street starting from the clock located at the intersection of Main Street and Canal Street and head south.

Creation of the new curb and installation of pavers similar to those used in the previous parking lot projects along Main Street will be conducted by contract workers.

Councilor Tammy Valente said she looked back at the donations during her term in office and noticed that Picayune Main Street has provided more donations to the city than any other organization.

Also during the meeting, Mayor Ed Pinero recognized Macy Pigott, a student at Our Lady Academy, who attended Tuesday’s meeting as part of a class project.

At the end of the meeting, Councilor Wayne Gouguet asked the Council to consider becoming involved in the Pearl River County Board of Supervisor’s effort to fund an Economic Development Council.

In other business, the Council:

— Approved a motion to appoint Eric Bradley to the Picayune Housing Authority to fill a void left by J.P. Burns’ passing.

The next meeting of the Council will be Dec. 3, at 5 p.m. in City Hall. It will be the only meeting for the month of December.