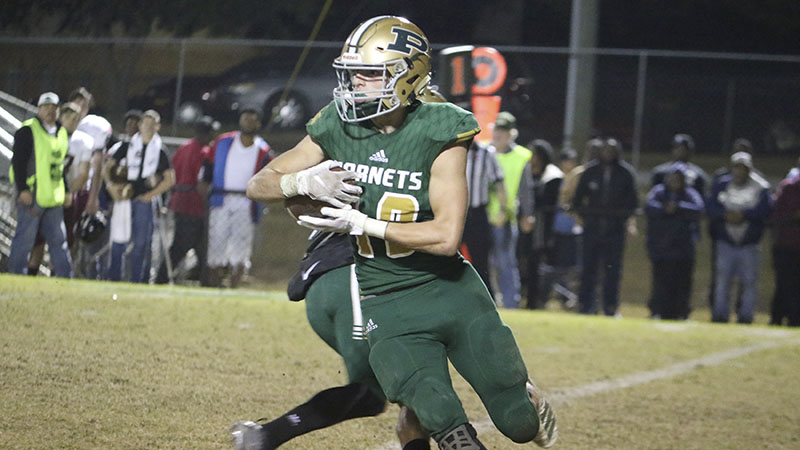 What started as a hard fought game for the Poplarville’s Hornets Friday night against the Lawrence County Cougars, turned into a big 38-14 win for, Poplarville, who are now Mississippi’s 4A South State Champions.

Poplarville took the lead close to the end of the first quarter when a 12 play drive for more than 65 yards was capped with a touchdown run by Zac Owen from the Cougars’ 24. With a little more than three minutes to play in the quarter, the score was 7-0 with Carpenter’s PAT.

Lawrence County closed the gap on the team’s next possession in two plays that began from the team’s own 49. In the next play, Kylan Cooper ran the ball from the Hornets’ 44 for a touchdown with 2:39 left to play in the first quarter. Eduardo Del Angel’s PAT tied the score up.

On Poplarville’s ensuing possession, the team only needed five plays to allow Caziah Daniels to tote the ball to paydirt from the Cougars’ 25. With 1:31 on the clock, the Hornets took a 14-0 lead with Carpenter’s PAT.

The second quarter would be a bit of back and forth as both defenses kept the ball out of the end zone until the Cougars made a mad dash for one more touchdown before the first half ran out. With the clock winding down, the Cougars were able to score one last touchdown when Cooper carried the ball from the Hornet’s 7. Angel’s PAT tied the game up.

The second half of the game was a different affair. Poplarville not only got a commanding lead, but dominated possession of the ball to take the win.

To start the third quarter, Poplarville kicked the ball off to Lawrence County, but the ball fell out of bounds, forcing the Hornets to kick it again. This time the Hornets tried an on-side kick, which resulted in the Hornets taking possession at the Cougars’ 37. Five plays later Casin Sones carried the ball from the 11 yard line combined with Zach Carpenter’s PAT to give the Hornets a 21-14 lead with 10:05 left in the third.

Another successful onside kick gave the Hornets the ball again, but it eventually went back to the Cougars after a quick three and out.

But on the Cougars’ next play, an attempt by Haden Mullins to make a big pass play resulted in Torry Polk picking it off and giving possession back to the Hornets.

While Poplarville was not able to reach the end zone, the Hornets were within striking distance of a field goal, a task Carpenter made short work of with the snap coming from the 15. The score was 24-14.

After a quick three and out by Lawrence County, Poplarville again resumed possession of the ball, capitalizing on seven plays covering more than 60 yards that ended with a Zac Owen touchdown run from the Cougars’ seven yard line. Carpenter’s PAT put the lead at 31-14 with 1:21 left to play in the third.

Another three and out by the Cougars put the ball in the Hornets’ hands again, this time at the Cougars’ 47. Eight plays later, Casin Sones took the ball from the Cougars’ 15 to the end zone for the last touchdown of the game. Carpenters’ PAT brought the final score to 38-14 with 7:46 left to play.

After holding possession of the ball for the most of the rest of the game, all it took was a couple of knelled plays to seal the win.

“I just thank the good Lord Jesus Christ for giving us the chance, this opportunity, to be here, and giving us the ability to do what we done,” said Poplarville Head Coach Jay Beech. “Man it feels great right now.”

With the win, Poplarville takes the South State Championship title for the second year in a row.

Poplarville will now prepare for a State Championship game against Corinth, set for Dec. 7, at 11 a.m. on the campus of the University of Southern Mississippi.