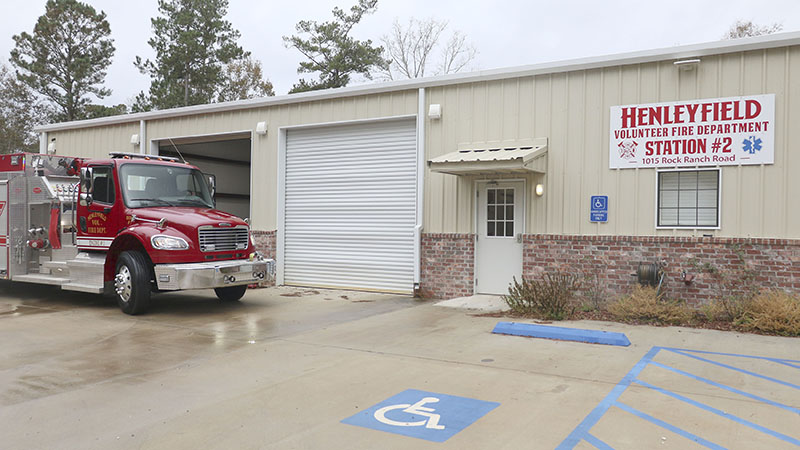 FASTER RESPONSE TIME: This new station on Rock Ranch Road, combined with a new class A pumper and tanker, will allow firefighters with the Henleyfield Volunteer Fire Department to respond to calls more quickly while also bringing the cost of fire insurance down for residents within that district. Photo by Jeremy Pittari

In half the time the department’s members planned, Henleyfield Volunteer Fire Department was able to add a new station, pumper/tanker and as a result bring the fire class rating for residents within all of their fire district down to a 7.

Henleyfield VFD Captain and Treasurer Daryl Smith said that back in March of 2015, members of the department wanted to add a new truck and station to bring their district’s fire rating down to help residents save money on their fire insurance.

With some residents in their district being more than five miles from the department’s main and only station at the time, located on Highway 43 North, those homeowners were paying insurance based on a rating of 10. The lower the rating, the less a homeowner pays in fire insurance. Smith said the new rating should save most homeowners at least $1,000.

Through fundraisers, grant funds and a donation from the Lower Pearl River Valley Foundation, that goal of achieving a rating of 7 was reached in September of this year, Smith said.

It included the purchase of a new 2,000 gallon class A pumper and tanker in August of 2018 and the construction of a new station on Rock Ranch Road.

Smith said the land for the station was donated after the owner’s passing, and students with the Pearl River Community College equipment operator’s class cleared it.

The new station also doubles as a polling place, which resulted in the Pearl River County’s Board of Supervisors kicking in $15,000. Smith said the truck cost about $300,000 and the building cost the department about $110,000.

With the down payments and other funding, the department has reduced its debt to $130,000 on the truck and $75,000 on the station, which will be retired using a combination of fire insurance rebate funds and county tax levies, especially since the main station on Highway 43 North will be paid off early next year, Smith said.