Council to move to iPads, made Lewis Circle one way 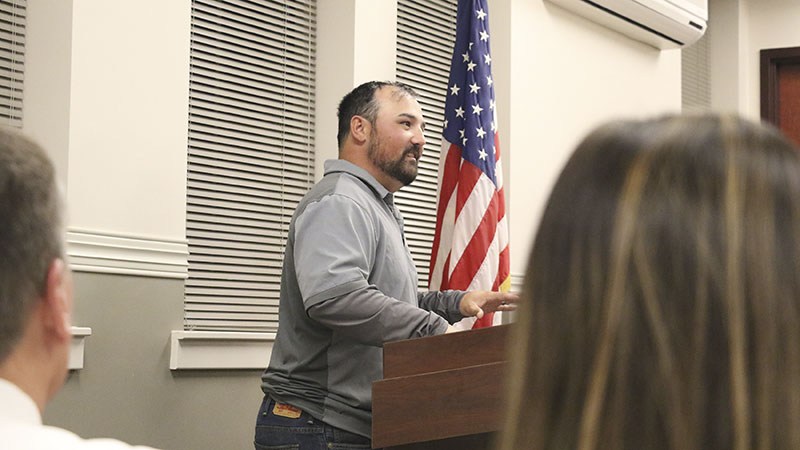 ONE OF A KIND: Parks and Recreation Director for the city of Picayune Trevor Adam updates the Council on the successes of a program he and a colleague formed called Buddy Ball. He said it has grown to the point that people from surrounding counties and parishes are now participating. Photo by Jeremy Pittari

Councilors with the city of Picayune will soon be utilizing iPads instead of paper packets during meetings.

The decision was made during Tuesday’s meeting when the Council approved entering into an agreement with Municode. City Clerk Amber Hinton said the change will cost the city $4,500 annually, but will come out to be a wash since the city will save on the cost of paper for the traditional packets and the two to three days in employee pay involved in creating those packets. Hinton said the iPads would be a one time cost of about $3,500.

A motion to enter into a memorandum of understanding with Municipal Intercept Company LLC, was also approved during the meeting. Hinton said the company will now be allowed to collect old debts as part of the Local Government Debt Collection Setoff Act. Hinton said anyone who owes the city money will receive a letter from the city first concerning that debt alerting them that it would be in their best interest to pay the debt before the company gets involved and starts collecting additional fees. Once the company becomes involved, it will send that debt to the state for collection.

The Council also approved a motion to adjust the flow of traffic along Lewis Street to make way for school buses. Currently, cars park on both sides of the two way street creating space issues for school buses.

As part of the change a 10 by 20 foot space will be established for each apartment and the street will be converted to one way. Public Works Director Eric Morris said the city will assist with the installation of signs and speed bumps.

During the Coucilmember’s business section of the meeting, Councilors Tammy Valente and Jan Miller Stevens praised Grant Administrator Christy Goss for organizing a successful and heavily attended Trunk or Treat at Crosby Commons held last week. Stevens said she hopes the event can become a tradition in the city.

Councilor Wayne Gouguet asked about the status of a pending lawsuit between the city and the architect firm that designed the addition to City Hall. The suit has been filed due to issues with flooding during heavy rains. Hinton said the last word she heard about the suit is that it is scheduled for court sometime between June and November 2020.